The UN has condemned attacks on civilians and UN peacekeepers in the Democratic Republic of Congo by M23 rebel fighters. It also warned of an escalation of tension in the region. 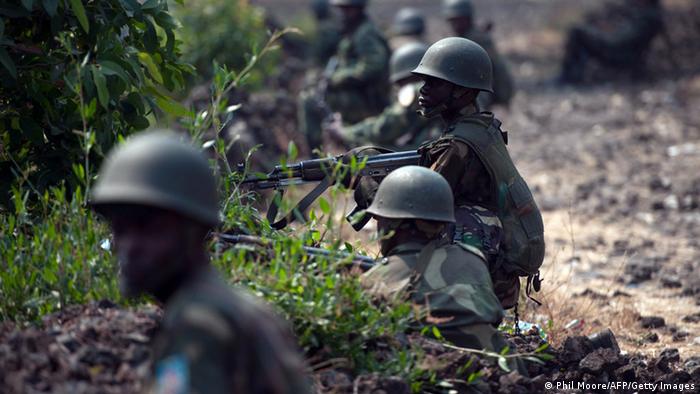 After six civilian deaths in the Democratic Republic of Congo (DRC), the United Nations envoy to the African Great Lakes region, Mary Robinson said any attacks on civilians or the UN peacekeepers, known by the acronym MONUSCO, were unacceptable.

"The attacks on the town of Goma as well as on MONUSCO forces, and their tragic consequences on the civilian population already traumatized by two decades of conflict, are unacceptable," envoy Robinson said.

"We must do everything to avoid an escalation of tension in the region, promote dialogue, and respect the letter and the spirit of the Addis Ababa Peace Security and Co-operation Framework," she added.

Two more civilians were killed on Saturday after a shell hit a neighborhood of Goma. It was unknown who fired the shell. MONUSCO, said two mortar bombs fired by M23 struck the Ndosho neighborhood of Goma - a city of one million people by Lake Kivu on the border with Rwanda.

MONUSCO chief Martin Kobler said that attacks on civilians would "not go unpunished."

Following Saturday's mortar attack on Goma, thousands of residents took to the streets, carrying the body of one the victims towards the Rwandan border in protest. Then, in a move reflecting local feeling that the UN force is not doing enough to protect them, they marched towards UN installations.

"This time you have to leave," they shouted at UN peacekeepers, before burning tires in the streets. Police fired teargas and shots were fired in the air. Protesters threw stones back in response.

The UN reports that more than 80 children recruited as soldiers by an armed group in the Democratic Republic of Congo have been rescued in the past few days. Some of the children are as young as 8 years of age. (17.08.2013)

The attack followed four civilian deaths on Friday after clashes between the UN troops and M23 rebels. The rebels had entered a security zone around Goma on Wednesday.

The group is named for the March 23 peace treaty in 2009 which was supposed to integrate its members into the country's armed forces. But citing poor conditions and non-implementation of the peace treaty terms, a number of soldiers left to form the rebel group in 2012. They have been active in eastern areas of the country since then.

Both the DRC government and the UN accuse Rwanda and Uganda of backing the M23, although both countries deny the accusation. Rwanda twice invaded its much larger neighbor in the 1990s and sponsored Congolese rebels trying to topple the government.

Congo's Information Minister Lambert Mende on Saturday accused Rwanda of direct involvement in this week's fighting. "Rwandan troops crossed the border [on Thursday] ... and were with M23. That is still the case as far as we know. Fighting is ongoing and we have found the bodies of Rwandan soldiers," he said.

Rwanda's defense ministry spokesman denied the claims and countered with accusations that Rwandan territory had been shelled. "Those are outrageous, old, spurious and outlandish accusations that do not justify senseless repeated provocative firing on Rwanda territory," Brigadier General Joseph Nzabamwita said.