The UN Security Council has voted to boost the manpower of its observer mission in Syria in an effort to hold Damascus to its promise to halt attacks on anti-government rebels. 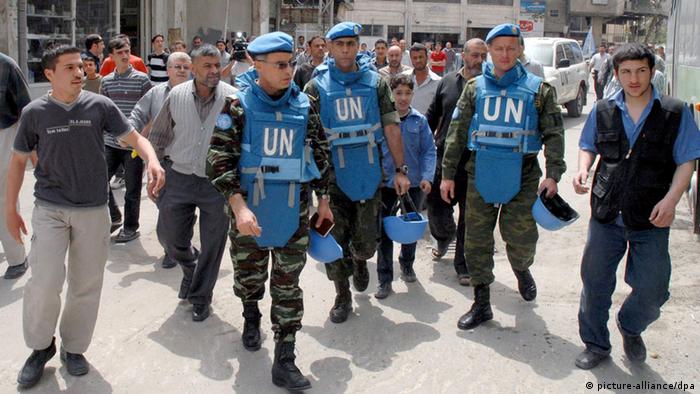 The United Nations Security Council voted unanimously on Saturday to increase the size of its monitoring mission in Syria to 300, demanding an immediate end to the escalating violence.

The UN mission has until now been limited to 30 observers, a number Secretary General Ban Ki-moon has said is far too small to do its job of ensuring compliance with a cease-fire between government forces and rebels. Ban now has the authority to decide when to deploy the additional observers, which will be unarmed and will include both military and civilian experts.

The UN debates its 'responsibility to protect'

Chapter 7 of the United Nations charter has a clause, known as the 'responsibility to protect,' and it is the sole argument in international law that would allow for legitimate military intervention in Syria. (20.04.2012)

"The deployment of the first 10 observers in Syria has not changed the murderous behavior of the regime," French UN ambassador Gerard Araud said, adding that Syrian President Bashar al-Assad had shown "contempt" toward the UN.

Russian ambassador Vitaly Churkin took a much more neutral tone, saying the resolution "is of fundamental importance to push forward the process of the peaceful settlement in Syria."

The United States and the United Kingdom chose not to co-sponsor the resolution amid doubts about the mission's future. American ambassador Susan Rice told the Council that the US might not allow the mission to be renewed after the first three months.

"Our patience is exhausted," she said. "If there is not a sustained cessation of violence, full freedom of movement for UN personnel, and rapid, meaningful progress on all other aspects of the six-point plan, then we must all conclude that this mission has run its course."

No threat of sanctions

The text of the resolution did not include a European threat of non-military sanctions if Damascus fails to pull out the military and heavy weaponry from high-population areas. The withdrawal was part of a six-point peace plan proposed by UN-Arab League envoy Kofi Annan.

The council called for "the urgent, comprehensive, and immediate implementation of all elements of the envoy's six-point proposal."

Annan's plan called for an absolute cease-fire by April 12, however violence has continued in the country. Ban said Thursday that there had been "no progress" on the cease-fire's implementation and that the continuing violence was "unacceptable."

Meanwhile the current team of 30 UN observers visited the dissident-held province of Homs on Saturday. Opposition activists in the area said shelling and gunfire had stopped there for the first time in weeks.

Despite the relative quiet, the London-based Syrian Observatory for Human Rights said 11 people were killed on Saturday. It said one civilian was killed by a sniper near the Lebanese border and another was killed in Daraa province during government raids in the area, while nine army deserters were killed in an ambush in the northern Aleppo province.

Opposition groups say more than 200 people have been killed in Syria since the deadline for the cease-fire.