Ukrainian parliament fights over ratification of Russian deal | Europe | News and current affairs from around the continent | DW | 27.04.2010

Ukrainian lawmakers got rough, threw eggs and smoke bombs, but still voted in favor of deal with Russia ensuring cheaper natural gas for Ukraine in exchange for the lease of a key naval base to Moscow. 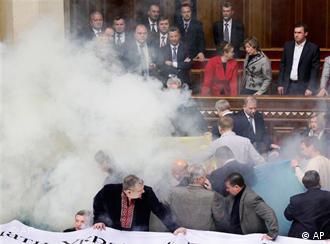 The parliament is bitterly divided over the Russian deal

The Ukrainian parliament in Kiev has ratified a deal with Russia extending the Kremlin's lease for a key naval base in Ukraine's Crimea, even as bitterly divided lawmakers scuffled over a giant Ukrainian flag in the middle of the parliamentary chamber, and smoke bombs made the room hazy.

Several black umbrellas protected parliament speaker Volodymyr Litvyn from the paper wads and eggs being thrown at him, while other deputies held their noses or put on masks against the smoke. 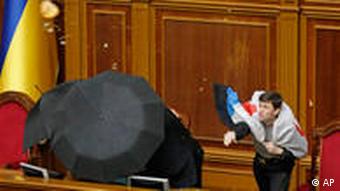 The speaker hid behind umbrellas as eggs began to fly

The deal is the first concrete sign of the more friendly approach to Russia under newly-elected President Viktor Yanukovych. The agreement, also ratified by Russia's lower house of parliament, extends the Russian navy's lease at the port of Sevastopol for 25 years after the current lease expires in 2017.

The deal was signed by Yanukovych and Russian President Dmitry Medvedev last week and has been heavily criticized by supporters of Yanukovych's pro-Western predecessor Viktor Yushchenko. Outside the parliament building, they shouted "Death to traitors!" and "Crimea is ours."

In exchange for the lease extension, Russia is giving Ukraine a 30 percent discount on Russian natural gas imports, a pledge worth some 30 billion euros ($40 billion) over 10 years. 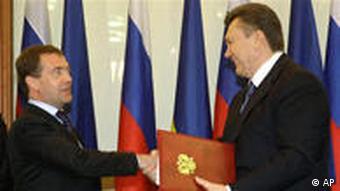 Earlier on Tuesday, Russian Prime Minister Vladimir Putin held talks with Ukrainian leaders in Kiev at which he offered an unprecedented nuclear cooperation deal. He admitted to reporters that the gas deal had hurt the Russian budget.

"It's going to be a burden, of course. And a major one," he said. "The amount that this has cost us is really something else. For this kind of money I could have eaten Yanukovych and your prime minister together."

Russia's supply of natural gas to Ukraine has been cut three times in recent years over disagreements on payments from Ukraine. European Union officials stepped in during the most recent standoff in 2009 when Moscow's decision to halt gas flowing through Ukrainian pipes led to shortages in the EU.

Ukraine has just ratified a landmark deal with Russia under which Kyiv will receive a large discount on gas in exchange for extending the lease of Russia’s Black Sea Fleet based in Sevastopol. (28.04.2010)

A surprise deal between Ukraine and Russia implies new rapprochement in Eastern Europe. Top-ranking politicians have declared a new era in the countries' relations - to the chagrin of Ukraine's pro-West opposition. (22.04.2010)