Ukraine: What will the next days bring and what is Russia′s overall plan? | Europe | News and current affairs from around the continent | DW | 26.02.2022

Ukraine: What will the next days bring and what is Russia's overall plan?

As Russian forces push into Ukraine, DW speaks with Mathieu Boulegue, a research fellow who specializes in Russia for Chatham House, about how the fighting could continue and what Putin's overall strategy might be. 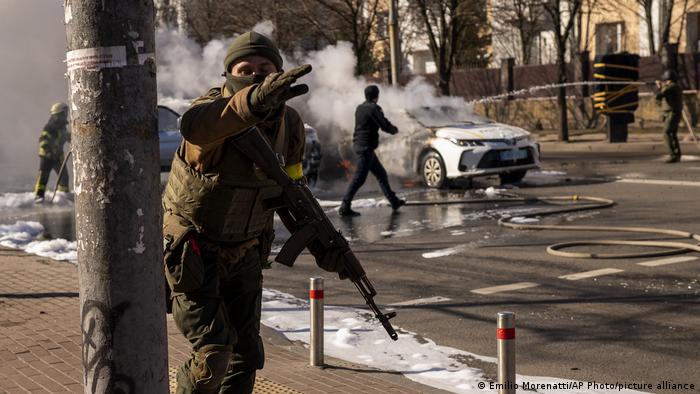 DW: Is the situation for the Ukrainian military as desperate as it looks?

Mathieu Boulegue: The situation is not actually that desperate. The Russian forces have been slowed down at several points by the Ukrainian army. The Russians are having a hard time suppressing the air defense of Ukraine, and Ukrainian forces are fighting now for every square inch of battle. This is slowing down the first phase, the first onslaught. It is very much about mitigating the consequences at this stage and leaving enough room for Ukraine to prepare a counteroffensive once Russian forces start to really move in. Phase 2 is probably going to be a large-scale land invasion in the coming days.

Can the Ukrainian forces hold Kyiv?

Kyiv is in a very tricky situation because the Russian army would probably surround the city from several strategic directions. From Belarus in the north, we've seen Russian troops moving in through Chernobyl, and Russia is probably trying to do a pincer movement coming from the east to surround the city.

The question is whether Russia is pressed for time and decides to move into Kyiv very quickly or whether they can afford a siege logic while they continue operations. The battle could therefore be either extremely quick or extremely bloody, depending on what the ambition is.

What do you think is Russia's plan for Ukraine? To get hold of all of it or to partition it?

Honestly, your bet is as good as mine at this stage. It is a maximalist plan though, let's be realistic. But this will be mitigated by the ability of the Ukrainian forces to fight back and by our own response in the West, by whether there will be a genuine response to try to change the cost-benefit calculation of the Kremlin. The third mitigating factor is the will to fight of the Russian forces. If we start seeing tactical mistakes made by Russia because of an absence of morale or discipline, then this could also precipitate the calculations.

Is Russia's plan to completely occupy Ukraine, change the government and stay?

The plan is not necessarily to completely occupy the country. The costs of a complete occupation would probably be too much. But I think they have sort of accelerated the decision to move into Kyiv, which was always one of the ambitions for regime change purposes.

Zelenskyy denies claims that he has left Ukraine

If you acquired the capital city and if you decapitate the political leadership and you place your puppets, then it completely changes the map of Russia's plan. I think because of the ability of the Ukrainian forces to initially slow down the onslaught of Russian forces, the Kremlin might have accelerated the calculation that they need to take Kyiv as fast as possible. So they need to win that battle as fast as possible.

Can you make a prognosis for a few days or weeks ahead?

I think, today and in the next coming days, we will be seeing the battle for Kyiv as Russian troops continue to move in. And, with phase 2 there will be the follow-on invasion. Once the air defense system of Ukraine will have fallen, we will start seeing phase two in the coming four to five days. So within a week, we will probably have a completely different military geography of Ukraine.

What more could the West do?

The problem if we send weapons is that Russia could use it against us. They'd say: "Well, you're sending weapons systems so you're now a co-combatant, you're now equally at war with us." This would be a very dangerous escalation. In Putin's personal rhetoric he was sort of playing with a nuclear threat. This is an extremely dangerous moment, so this is definitely something we will need to consider in the West.

This doesn't mean that we are useless. We could provide and we should provide increased military assistance specifically when it comes to helping with cyber security, or fighting disinformation — which is a form of warfare. There is a lot that can be done in terms of financial assistance. We need a Marshall Plan for Ukraine. We need massive help to make sure there is something left of Ukraine in economic and financial terms. There is a lot that can be done at the humanitarian level or military-humanitarian level: medical assistance, logistical assistance and so on. It is crucial to help the victims of war, the refugees, and the internally displaced persons.

Thousands of Ukrainians flee to Poland

Do you think Ukraine was badly prepared for Russia's attack?

You can't prepare for an assault like that. I think Ukrainian forces were as well-prepared as they could have been. They have everything to lose and therefore will fight to the death if they have to — which Russia doesn't have to. And we have some indication that there is low morale and willingness to fight in the Russian army, they are for instance forcing conscripts to sign contracts to fight instead of just doing noncombatant activity.

So we are seeing, in a way, a desperate Russia against a less superior but extremely motivated and ready army. We've heard the minister of defense of Ukraine asking Kyiv civilians to prepare Molotov cocktails to repulse the aggression. This is the level of readiness and the mentality they have. They will fight to the death if they have to.

Mathieu Boulegue is a Research Fellow with the Russia and Eurasia Programme at Chatham House.

Russia's invasion of Ukraine: What has happened so far?

Kyiv has held out overnight against Russian attacks and bombing as fighting intensifies in other cities. DW has an overview as the Russian war on Ukraine rages on.

Russia's invasion of Ukraine in 5 graphics

Since the first tanks crossed into Ukraine, attacks from Russia have intensified and hundreds of thousands of people are fleeing. Five graphics explain the history and current conflict.