Ukraine's ambassador has rejected an invitation to an event marking the 80th anniversary of Hitler's invasion of the Soviet Union at Berlin's German-Russian museum. He said the venue choice was "bewildering." 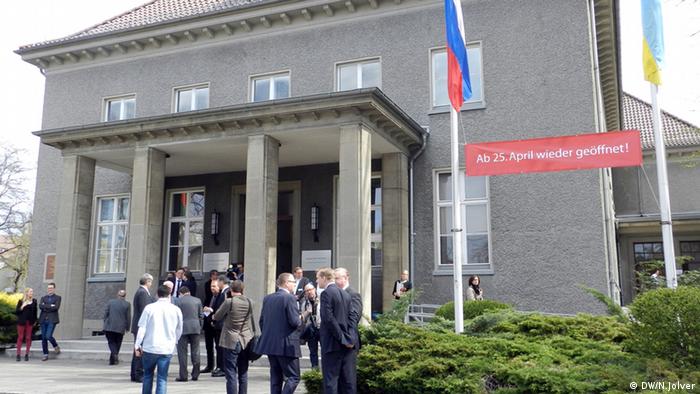 Staging it at Berlin's German-Russian Museum was "an affront, very regrettable and bewildering," said Melnyk, because immense wartime persecution of other nations such as Ukraine, Belarus and Baltic nations, was being "simply ignored." 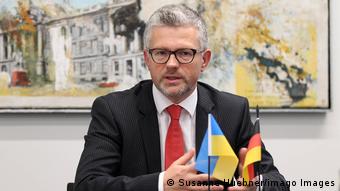 "The guilt of the Germans for the Nazi crimes is still only being considered in terms of Russia and the Russians,'' wrote Melnyk to the museum's director.

The renovated facility in Berlin-Karlshorst was where Soviet forces got three commanders of Nazi Germany's military to capitulate — two days after a Nazi naval commander had surrendered to Allied forces at Reims in France.

Berlin-Karlshorst became a Red Army base and then the Soviet headquarters in former East Germany, including a large KGB intelligence outpost, until German reunification in the early 1990s.

Where the war ended

Where the war ended — Berlin-Karlshorst

The office of President Frank-Walter Steinmeier said Ukraine's invitation rebuff "contradicted" the German head of state's intention that Friday's exhibition opening "should have a unifying effect across all differences and conflicts.''

Melnyk's "sweeping" criticism of current Germany's commemorative practices was a "disservice" to the legitimate interests of Ukraine, and German-Ukraine ties, said Steinmeier's office, referring to EU backing for Kyiv over issues such as Crimea.

Nazi Germany's surprise invasion of Soviet eastern Europe began on June 22, 1941. Hitler famously broke the non-aggression pact, also known as the Molotov-Ribbentrop pact, signed between Nazi Germany and the Soviet Union prior to Hitler's invasion of Poland that ultimately triggered war with France and Britain.

Germany's invasion ultimately resulted in some 27 million Soviet dead, half of them Red Army soldiers.

Hitler's "Operation Barbarossa," begun with 3.3 million troops, ended in their winter defeats near Moscow and Stalingrad, faced by Red Army recruits, with February 1943 becoming one of the turning points in World War II, known in Russia as the Great Patriotic War.

70 Years Since the Battle of Stalingrad

Most lethal front in the Second World War by far

Preview material for Friday's exhibition, entitled "Dimension of a Crime", states: "Anti-Bolshevik and racist attitudes played as much a role as military and economic interests of the Nazi regime. In total, more than 3 million Soviet prisoners of war perished [in Nazi German captivity]. A large number of them were shot."

Steinmeier, laying a wreath at one such former war prisoner camp at Sandbostel in Germany's Lower Saxony state on Monday, remarked: "This dying did not take place somewhere in the distant past."

He also noted that Ukraine and Russia viewed those wartime events in the meantime very differently but warned: "We mustn't instrumentalize history against others, against neighbors."

At Sandbostel, between Hanover and Hamburg, some 300,000 inmates died, 70,000 of them Soviet soldiers — victims of abuse, hunger and forced labor. They were among 5.7 Soviet soldiers captured by Nazi Germany. Attending a conference in Moscow of Russian and German researchers on Wednesday, Wolfgang Schneiderhan said the Hitler regime's intent was one of " "enslavement and extermination of entire peoples."

The 1941 offensive was not "normal" warfare as history records but "from the outset a racist-ideological extermination campaign," said Schneiderhan. The fighting itself on the Eastern Front was also notoriously brutal, with less regard for rules of engagement than in other theaters during the conflict.

Now the president of Germany's War Graves Commission, Schneiderhan was until 2009 inspector-general of Germany's Bundeswehr — its post-war military.

The Moscow conference is part of a year-long cooperative Russian-German program in which archives, including Germany's Federal Archive, aim to establish the names, biographies and fate of many captured and perished Soviets.

Karl Cramm’s father was one of the more than 1 million German soldiers still considered missing after WWII. The 83-year-old had last seen him when he was just a boy. Then he got some surprising news.