A monitoring delegation was patrolling the area when their vehicle hit a landmine in rebel-held territory. A German national was also injured in the blast, with Chancellor Merkel calling for an investigation. 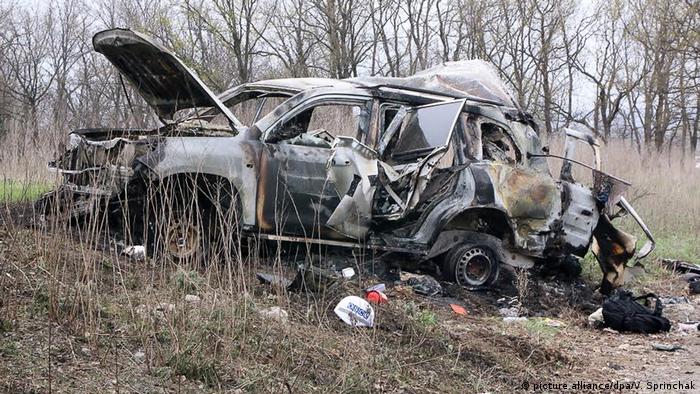 A staff member for the Organization for Security and Cooperation in Europe (OSCE) was killed in eastern Ukraine Sunday, according to the European security watchdog.

The OSCE said later on Sunday that an American monitor was killed in the blast. A German and a Czech national were also wounded, the OSCE SMM deputy head Alexander Hug told reporters in Kyiv. The blast occured after a patrol vehicle hit a landmine in the the town of Prishib, near the separatist's line in Lugansk province.

It is the first loss for the security body's Special Monitoring Mission (SMM) in Ukraine since the conflict broke out more than three years ago.

German Chancellor Angela Merkel echoed Kurz's call for an investigation and said she was appalled by the news.

The news of the death of an OSCE Special Monitoring Mission staff member in eastern Ukraine has filled me with sorrow and horror," Merkel said in a statement.

"The government expects that the conflict parties immediately do everything possible to ascertain how it reached this tragic point and who holds responsibility for it," she added.

The separatists in Lugansk offered conflicting explanations for the bombing. They initially put out a statement on their official news site, accusing the OSCE team of veering off the main road, and travelling along an unsafe route.

"We know that this patrol team deviated from the main route and was moving along secondary roads, which is prohibited by the OSCE Special Monitoring Mission mandate," according to the separatist's statement. "We have repeatedly drawn the OSCE SMM's attention to the need to follow security measures while travelling on its monitoring missions."

Neither of the rebels' claims could be immediately confirmed.

The war between Kyiv's forces and the Moscow-backed eastern insurgents has claimed more than 10,000 lives and driven more than two million people from their homes since 2014.

An international peace plan was brokered in 2015, but it has yet to be implemented. The OSCE has about 600 monitors on the ground in Ukraine.