Ukraine readies for attacks in east

Amid a crumbling peace plan in Ukraine, NATO has reported Russian troop movement near the Ukrainian border. Meanwhile, Kyiv has vowed to protect eastern cities from the rebels trying to exert power over the region. 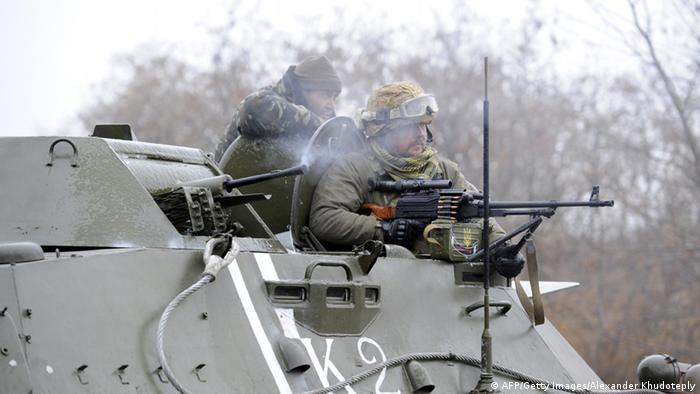 Ukrainian President Petro Poroshenko convened the Ukraine's National Security and Defense Council on Tuesday evening in reaction to the ballot held over the weekend by separatist leaders in eastern Ukraine.

"Ukraine remains a firm supporter of the peace plan," Poroshenko told his security chiefs at the start of the meeting.

While the peace plan has not been entirely effective, with continued reports of fighting near Donetsk and other cities in the east, the Ukrainian president has thus far rejected a new military campaign.

But on Tuesday, Poroshenko requested the military deploy more troops to the eastern towns of Mariupol and Kharkiv, in a bid to stave off attacks.

"Several new units have been formed that will enable us to repel possible attacks [in those areas] and [in] areas north of Luhansk and the Dnipropetrovsk region," he said, according to a statement on the president's website.

Poroshenko was also expected to discuss throwing out the legislation which would provide for three years of more autonomy for the eastern breakaway regions known as the Donetsk and Luhansk People's Republics.

Separatist leaders angered Kyiv over the weekend when they went ahead with presidential and parliamentary elections, a move which the Ukrainian government said violated the Minsk agreements. According to the peace plan, which Moscow, Kyiv and the rebels signed in early September, local elections could only take place under Ukrainian law.

Meanwhile, Alexander Zakharchenko and Igor Plotnitsky, the winners in Sunday's elections, were sworn in as the respective presidents of Donetsk and Luhansk on Tuesday.

Their insistence on moving forward with exerting their authority over the region prompted concern from the EU's new foreign affairs minister.

It would be "extremely difficult, if not impossible," to move toward peace if the current accord were to collapse, EU foreign policy chief Federica Mogherini told the UK's Guardian newspaper.

Later in the day, she told reporters in Brussels that the separatist elections threatened to close "the window of opportunity" for all sides to maintain dialogue, instead of reverting back to an armed conflict.

TheUS and UN have also rebuked leaders in eastern Ukraine in recent days, a criticism which also points to Moscow's influence over the region. While Russia has not formally endorsed the outcome of Sunday's polls, it supported the legitimacy of the elections.

More than 4,000 people have been killed in eastern Ukraine since fighting broke out roughly six months ago, according UN figures.