Ukraine's opposition has urged for "vocal support" from the West at the Munich Security Conference. The call for action comes on the heels of a growing controversy over the treatment of Ukrainian protester.

"Ukraine desperately needs a Marshall plan and not martial law in order to stabilize the political and economic situation in the country," Arseniy Yatsenyuk, leader of the party of jailed former prime minister Yulia Tymoshenko, told reporters in Munich on Friday.

The opposition delegation met with German Foreign Minister Frank-Walter Steinmeier, President Joachim Gauck and the European Union's foreign policy chief Catherine Ashton on Friday. Former boxer turned politician Vitali Klitschko (pictured) arrived in Munich late in the evening and will join the group for talks with US Secretary of State John Kerry on Saturday during the 50th edition of the Munich Security Conference, a gathering famous as a venue for diplomatic and political negotiations.

Kerry said earlier in the day in Berlin that offers from Ukrainian President Viktor Yanukovych to end the country's political crisis had "not yet reached an adequate level of reform."

The country was thrown into turmoil in November when Yanukovych spurned an economic deal with the EU in favor of strengthening ties with Russia. Protests have grown increasingly violent of late. At least six people have been killed and hundreds injured.

A day after going on sick leave Yanukovych repealed a controversial anti-protest law and granted amnesty for demonstrators detained during mass rallies.

The latest developments come as controversy increases around the treatment of a missing opposition activist who resurfaced on Thursday night. Dmytro Bulatov, whose whereabouts were unknown for more than a week, said he was tortured by captors who cut off his ear, drove nails through his hands and then left him in a forest. 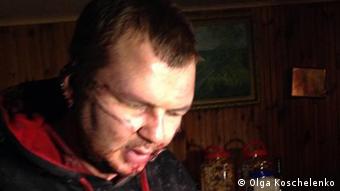 "My hands... they crucified me, nailed me, cut my ear off, cut my face," Bulatov, still wearing his bloodied clothes, told Ukraine's Channel 5 TV. "Thank God I am alive … I can't see well now, because I sat in darkness the whole time."

White House spokesman Jay Carney said the US was "appalled" at the "obvious signs of torture" on Bulatov's body, a sentiment voiced earlier by Catherine Ashton. Rights group Amnesty International, meanwhile, called for the "barbaric" act to be investigated.

Opposition figure Oleksandr Turchynov accused the government of being behind the attacks on Bulatov and other activists.

The Interior Ministry said it was investigating Bulatov's story, but it also accused him of failing to cooperate. Later the ministry released a statement saying he was also suspected of organizing mass demonstrations. Opposition lawmakers rushed to the hospital to keep police and ministry investigators from reaching Bulatov in a standoff that lasted into the night.