There has been renewed fighting around the Donetsk airport in eastern Ukraine. The clashes threaten to undermine a truce and come as regional elections are held in Crimea, the territory annexed by Russia in March. 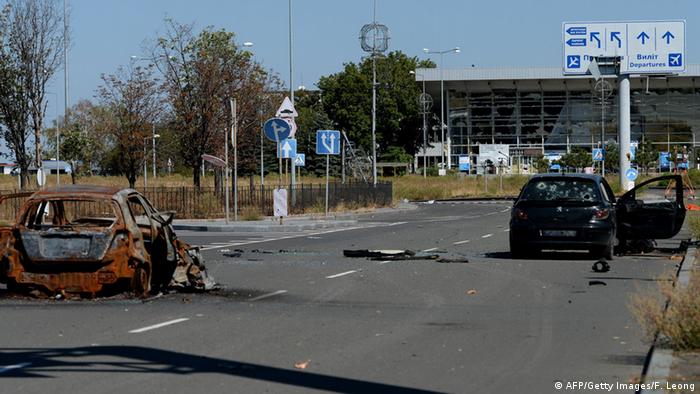 News agencies on Sunday reported heavy fighting around the rebel stronghold of Donetsk, a development that threatens to derail a ceasefire agreement struck a little over a week ago.

Most of the violence appeared to be concentrated near the city's government-held airport (pictured above), where Kyiv's forces said they were facing intensifying attacks after driving back a major rebel assault of more than 100 fighters on Friday.

However, insurgent forces have heaped blame for the fresh violence on the Ukrainian military. Two residential neighborhoods near the airport came under repeated shelling on Sunday, according to the city council of Donetsk.

"From our side, nobody is shooting but they are breaking the rules, everybody in the world knows it," a rebel commander told the news agency AFP.

The ceasefire agreement struck between the Ukrainian government, the Organization for Security and Cooperation in Europe (OSCE), pro-Russia separatists and Moscow on September 5 had mostly been holding in eastern Ukraine, where five months of fighting have claimed more than 2,500 lives.

Under the deal, rebels and government forces have swapped dozens of hostages, and Ukrainian President Petro Poroshenko has promised to give the country's largely Russian-speaking eastern regions some limited autonomy. Both sides had also conditionally agreed to exchange more prisoners later on Sunday.

"They (Moscow) will outplay us," Yatsenyuk said. "He wants to eliminate Ukraine as an independent country…He wants to restore the Soviet Union."

Also on Saturday, Russia sent a convoy of more than 200 trucks reportedly carrying aid over Ukraine's border to rebel-held Luhansk, a city which has faced severe water and power shortages.

Colonel Andriy Lysenko from the Ukrainian National Security and Defense Council voiced concerns the trucks may be carrying supplies for insurgents, and said the deliveries "violated customs-clearing procedures."

"Ukraine border guards and customs were not allowed to examine the cargo and vehicles," he said. "Representatives of the Red Cross don't accompany the cargo, nobody knows what's inside."

Kyiv labeled a previous Russian convoy that crossed the border without the approval of the Ukrainian authorities in August as "a direct invasion."

Moscow has long denied playing any role in supplying weaponry or troops to support the separatists' campaign in Ukraine's southeast, although NATO says at least 1,000 Russian soldiers remain on Ukrainian soil.

Crimea heads to the polls

Meanwhile, residents of the Crimean Peninsula are voting to elect their first regional parliament since Russia annexed the Ukrainian territory in March - a move that escalated tensions in eastern Ukraine.

Polyovyi said Sunday that Ukraine considers the election illegal and that those running them could be charged with seizing state power - an offense which carries a prison term of up to 10 years.

Polls were held in thousands of Russian regions, districts and cities on Sunday, and were widely expected to be dominated by Putin's supporters in the national parliament, including the United Russia party, the Just Russia party and the Liberal Democrats.