Germany and Russia have announced their support for a proposed new ceasefire deal in east Ukraine. The announcement follows a four-way phone call with the French and Ukrainian presidents. 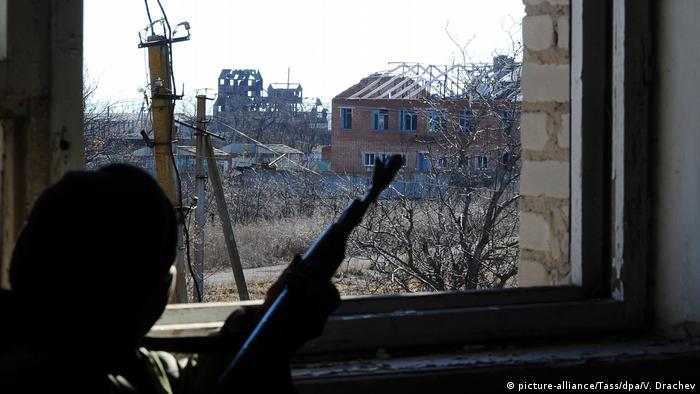 A fresh ceasefire agreement in eastern Ukraine's Donbas region is expected to be announced on Wednesday, according to Berlin and Moscow.

German Chancellor Angela Merkel's spokesperson, Steffen Seibert, revealed that Merkel took part in a four-way telephone conference with Russian President Vladimir Putin, French President Emmanuel Macron and Ukraine's Petro Poroshenko late on Tuesday, where the four leaders agreed to back a proposed truce deal in time for the beginning of the school year.

The four leaders (referred to together as the Normandy Format) expected "that the ceasefire would lead to a lasting improvement in the security situation, to the benefit of the school children and the wider civil society," Seibert said.

Russian and Ukrainian contact groups tasked with handling the peace talks are expected to announce the latest ceasefire deal on Wednesday.

Minsk agreement 'only alternative' to fighting with Russia

Minsk agreement 'only alternative' to fighting with Russia

A statement issued by the Kremlin said that all four parties had "decisively" expressed their support for the latest ceasefire proposal and the resumption of the 2015 Minsk peace deal.

The Minsk agreement, brokered by France and Germany, intended to halt hostilities between Ukrainian soldiers and pro-Russian rebels in Donbas. However, despite the deal receiving the backing from all parties, clashes have remained frequent and progress towards any renewed political settlement has stalled.

Fighting erupted in eastern Ukraine in early 2014 following Russia's annexation of Crimea. Since then, some 10,000 people are estimated to have been killed. Last month, Ukraine's military said nine soldiers had died in clashes with Russia-backed rebels, marking the worst violence seen in east Ukraine in months.