Ukraine Dissolves Parliament Ahead of New Elections | Europe| News and current affairs from around the continent | DW | 09.10.2008

Ukrainian President Viktor Yushchenko has ordered parliament dissolved and called for new elections. The poll has been set for early December. 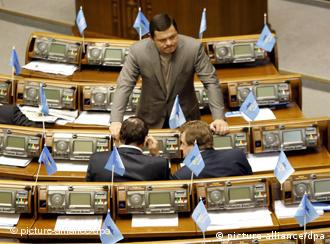 Ukrainian lawmakers will be headed back to their constituencies for campaigning

In an announcement on his Web site on Thursday, Oct. 9, he said fresh elections would take place on Dec. 7.

In a short, nationally televised, pre-recorded speech broadcast on Wednesday the Orange Revolution leader dissolved parliament as part of an agreement among top parties that new elections were necessary, as the legislature at the time had long been deadlocked.

By constitutional statute early parliamentary elections are mandated in Ukraine 60 days after a legislature is dissolved by presidential order. Yushchenko did not specify whether he had signed the order.

Before ceasing work, Ukraine's current parliament should amend the national budget to pay for the vote, which according to Yushchenko, would allow Ukrainians to select a brand new legislature.

"The future must be decided by you, the Ukrainian people," Yushchenko said. 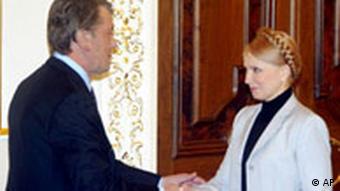 Ukraine's voters have gone to polls repeatedly since Yushchenko came to power in 2003, most recently in September 2007 in a vote putting a shaky pro-Western majority into power in the legislature.

Yushchenko's opponents have argued that dissolution of parliament would make the country's politics dangerously unstable. Some of Yushchenko's critics have called for the legislature to amend the constitution so Ukrainians could choose a new president in the upcoming election despite his term officially set to end in 2010.

His opponents, including one-time Orange Revolution ally and current Prime Minister Yulia Tymoshenko and former Prime Minister Viktor Yanukovych, said the country must pick a new president, if it were to select a new legislature.

Yanukovych, leader of the pro-Russia Regions Ukraine political party, predicted a strengthened position for his faction in the next legislature.

"This is the death knell of the present (pro-European) government," Yanukovych said, in remarks reported by the Interfax news agency. "We must look into the future, and consider how to unite people around ideas of improving the economy, and creating stability and peace in Ukraine."

The EU and Ukraine will sign an "association agreement" after a meeting between European leaders and the Ukrainian president in Paris. But the bloc did not mention concrete security guarantees or membership prospects. (09.09.2008)

Ukraine's ruling coalition could be on the brink of collapse after President Viktor Yushchenko threatened to dissolve parliament and call for snap elections if a new government is not formed within the 30 days. (03.09.2008)