A series of explosions has hit a warehouse storing tank ammunition and other weapons in eastern Ukraine. The blasts sparked a massive fire, prompting the evacuation of surrounding villages.

Ukraine's military said unknown saboteurs blew up the arsenal in the eastern city of Balaklia in the early hours of Thursday morning.

"According to preliminary data ... as a result of sabotage…fire and explosions caused the detonation of ammunition at several sites storing rockets and artillery weapons," chief military prosecutor Anatoly Matios wrote on Facebook.

The 368-hectare site, one of Ukraine's largest military depots, contained some 138,000 tons of ammunition, he added. 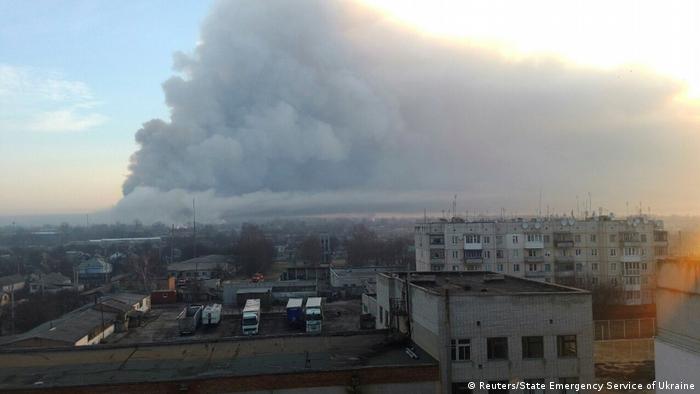 Authorities said there was no immediate information about any casualties. Rescue teams have evacuated around 20,000 people from villages in the Kharkiv region, near the border with Russia. Hundreds of firefighters were deployed to put out the blaze.

Military spokesman Oleksander Motuzyanyk said security had been bolstered around other military bases.

Ukrainian Prime Minister Volodymyr Groysman was due to fly to the area later on Thursday. Balaklia, a town of around 30,000 inhabitants, lies 100 kilometers (60 miles) from the frontline of Ukraine's war with pro-Russia separatists, which erupted in 2014 in the wake of the pro-Kremlin former president's ouster following mass protests in Kyiv. Moscow annexed the Crimean Peninsula in March 2014. More than 10,000 people have died in the conflict.

Attacks by pro-Russian rebels have delayed withdrawal of heavy weapons from the front line, Ukrainian army sources say. Both sides in the conflict had previously agreed to pull back the weapons within two weeks. (23.02.2015)

Chancellor Angela Merkel has reiterated Germany's position against arming government forces in the Ukraine conflict. She also said she was uncertain of the chances of success for a new German-French peace initiative. (07.02.2015)

World in Progress: On the run in eastern Ukraine

Normandy format talks on the Donbas conflict are set to continue next month. Meanwhile, a former top German adviser during the end of the Cold War has disputed Moscow's claims that NATO promised not to expand eastward.

Germany, France and Russia may hold summit on Ukraine conflict 12.10.2021

The German and French governments are hoping to meet with Russian and Ukrainian leaders to discuss the conflict in the Donbass, which erupted in 2014. Meanwhile, the EU's Ursula von der Leyen will visit Kyiv on Tuesday.