Police in Uganda fired teargas at demonstrators protesting against a proposed law that could remove presidential age limits. The change is seen as an attempt by longtime President Yoweri Museveni to extend his rule. 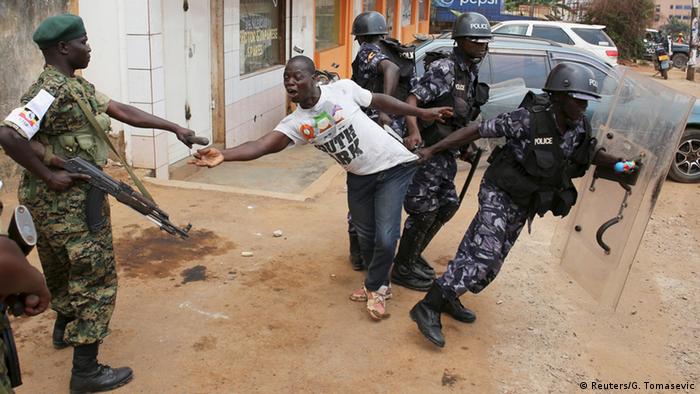 Armed officers tear-gassed and detained dozens of students who marched towards parliament on Thursday in defiance of a police order banning protests.

Lawmakers from Uganda's ruling party, the National Resistance Movement (NRM), had been expected to table a motion that would pave the way for a constitutional amendment scrapping presidential age limits. But following a chaotic session in which MPs threatened each other and traded insults, parliament was adjourned with the house speaker announcing the bill would likely be introduced next week.

Uganda's constitution bars anyone over the age of 75 from running for president, which stops President Yoweri Museveni, now 73, from standing for elections scheduled in 2021.

The proposed amendment has been met with fierce criticism from activists, civil society groups and members of the opposition. They say it is an attempt by Museveni, who has ruled for more than 30 years, to remain in office for the rest of his life. 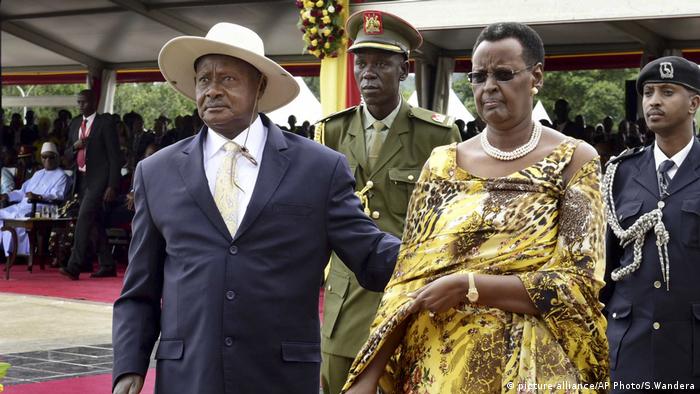 Yoweri Museveni, pictured with his wife, Janet, has ruled Uganda for more than three decades

Opposition figures have vowed to mobilize mass support and do everything they can to block the legislation. Despite a police order preventing protests, hundreds of students from Makerere University in Kampala had planned to stage a walk to the parliament precincts.

"We are not going to allow anybody to hold protest marches. The teargas was to deter that," police spokesman Asan Kasingye said.

Dozens of demonstrators, including Kampala Mayor Erias Lukwago, a prominent government critic, were rounded up. Police also arrested opposition leader Kizza Besigye at his home and raided the offices of an NGO and a think tank who they accused of inciting protests against the government.

Deborah Malac, the US ambassador to Uganda, on Thursday urged the government to protect basic freedoms "without fear of intimidation."

"The United States is deeply concerned that recent arrests and raids stifle the Ugandan people's right to free expression and tarnish Uganda's global image," Malac said in the statement.

The European Union's delegation in Uganda also said it was "deeply concerned" about the buildup of tension in Kampala, notably the "reports of cases of arrests and actions targeting NGOs and political activists."

The contentious legislation is expected to pass as the NRM holds a two-thirds majority in the national assembly. Once it gets initial approval, the bill will still need to go through the normal parliamentary process of debate, review and a second vote before becoming law. 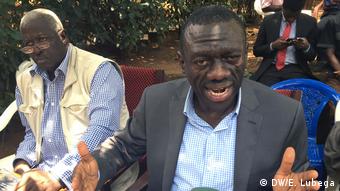 Kizza Bezigye has reportedly been detained at his home

If successful, it would be the second major change to Uganda's 20-year-old constitution to directly favor Museveni's continued stay in power.

In 2005, parliament voted to change the constitution allowing a president to serve more than two five-year terms. Although he came to power in a rebellion in 1986, Museveni ran the country unelected for 10 years until 1996 when Uganda lifted its ban on political parties.

Museveni is now serving his fifth term as Uganda's president, after winning the 2016 elections in a poll marred by allegations of vote fraud and intimidation by security forces.