The picture captured Olympus Mons, "the largest volcano in the solar system," the UAE's national space agency announced in a statement. 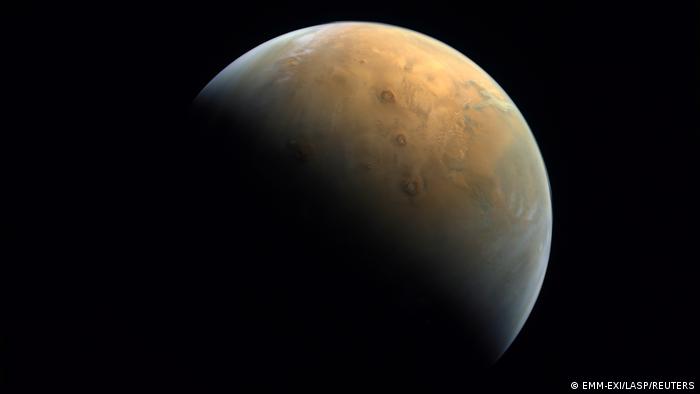 The image of "the largest volcano in the solar system" was taken from an altitude of 24,700 kilometers (15,300 miles) above the Martian surface on Wednesday, a day after the probe entered the planet's orbit, the agency reported in a statement.

The Amal probe reached Mars after a seven-month journey, making the UAE the first Arab country to have launched a successful interplanetary mission.

"The first picture of Mars captured by the first-ever Arab probe in history," he wrote.

'A defining moment' for the UAE

The UAE aims at revealing the secrets of Martian weather through its mission, which is expected to spend two years in orbit, capturing images and studying the planet's atmosphere and changing seasons.

The country also wants it to serve as an inspiration for the region's youth.

The UAE is only the fifth country in the world to reach the red planet. "Hope" became the first of three spacecraft to arrive at Mars this month after China  and the US also launched missions in July.

"The transmission of the Hope Probe's first image of Mars is a defining moment in our history and marks the UAE joining advanced nations involved in space exploration," the UAE's de facto ruler Mohammed bin Zayed wrote on Twitter.

The mission coincides with the 50th anniversary of the unification of the nation's seven emirates.

The UAE has unveiled an ambitious space program, which includes building a human settlement on Mars by the year 2117.