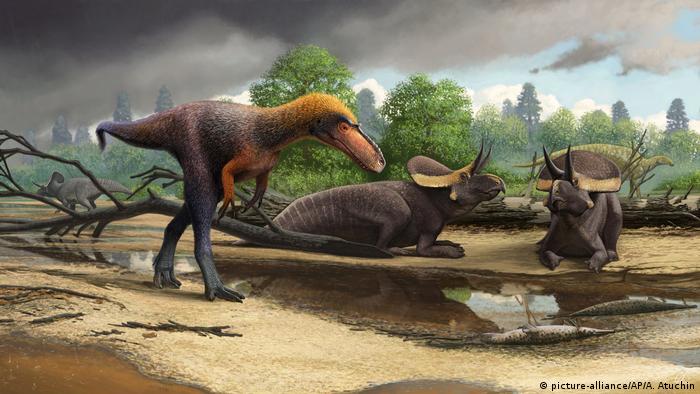 Paleontologists announced Monday in the scientific journal Nature Ecology & Evolution that the ferocious Tyrannosaurus rex (T. rex) evolved from dinosaurs no larger than a small child.

The study's lead author, Sterling Nesbitt, a paleontologist at Virginia Tech in the US, said that the fossils of the smaller T. rex cousin could provide one of the best examples yet as to how a smaller family of dinosaurs evolved into monstrous super predators.

"The small group of dinosaurs would give rise to some of the biggest predators that we've ever seen," said Nesbitt.

The newly discovered dinosaur, called Suskityrannus hazelae, is estimated to have weighed anywhere between 45 to 90 pounds (20 to 40 kilograms). Its height would have only reached 3 feet (90 centimeters). T. rex weighed around 9 tons and measured about 40 feet (12 meters) in length.

Monday's report said that Suskityrannus hazelae provides an intermediate link between older, smaller tyrannosaurs and the gigantic, last-surviving members of the species.

Nesbitt says he first discovered an incomplete skeleton of Suskityrannus hazelae in New Mexico in 1997, and another, more complete, sample in 1998. But in the decades since, scientists weren't certain what it was until other fossils of smaller T. rex cousins were discovered.

Another tiny cousin of the T. rex, called Moros intrepidus, was discovered in February and is thought to have lived 96 million years ago.

A link in the evolutionary chain

"Suskityrannus gives us a glimpse into the evolution of tyrannosaurs just before they take over the planet," said Nesbitt.

Although the discovery helps with understanding how the T. rex evolved, paleontologists have said that it is still unclear as to why the smaller carnivorous dinosaurs evolved to become so large.

Priceless prehistoric relics, like the Gorgosaurus skeleton selling for $6 million at auction this week, need to be kept clean and in good shape.

The newly discovered carnivorous dinosaur had a massive head and tiny arms, similar to the famous T. rex. The small front limbs may have held an advantage for survival.

The Spinosaurus — or spine lizard — was larger than the infamous Tyrannosaurus rex. Few fossils of the mighty predatory remain, so this is a exciting find.