Typhoon leaves many thousands dead in Philippines, heads to Vietnam

After Typhoon Haiyan ripped through the Philippines killing thousands of people, the storm is now headed west to Vietnam. The storm is expected to make landfall early Monday, local time. 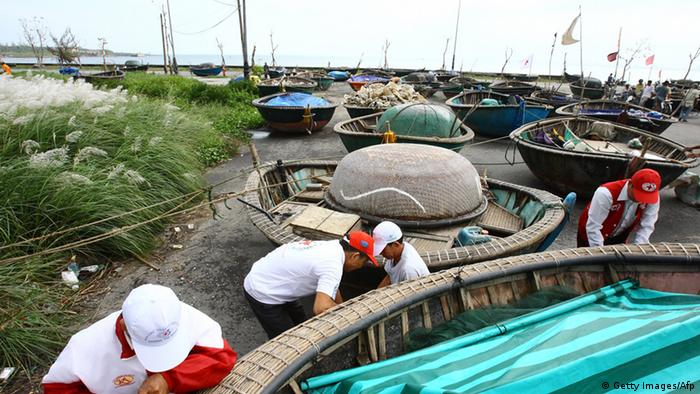 Typhoon Haiyan, one of the most power storms ever recorded, is now headed west toward Vietnam.

More than 600,000 Vietnamese have been evacuated from their homes. The storm is expected to strike late Sunday after changing course.

The Red Cross said Haiyan's changed path meant that Vietnam's potential “disaster area could be enlarged from nine provinces to as many as 15.”

After weakening over the South China Sea, the weather system is expected to hit Vietnam as a category 1 storm, meteorologists said.

The Vietnamese government website that five people had died while preparing for the storm.

The Philippines has been struck by one of the strongest typhoons ever recorded, affecting millions of people and leaving thousands feared dead. International aid organizations are mounting a massive relief effort. (10.11.2013)

'We are looking at a different kind of typhoon'

Thousands have reportedly been killed by Typhoon Haiyan. DW spoke with World Vision Philippines, whose response teams are racing to supply aid in the aftermath of one of the most powerful storms on record. (10.11.2013)

Haiyan barreled into the Philippines as a category 5 typhoon on Friday, crossing the archipelago from east to west in a matter of hours.

Tacloban, the capital of Leyte province, bore the brunt of the storm's force.

The typhoon destroyed about 70 to 80 percent of houses and other structures in its path, according to the police chief for Leyte, Elmer Soria.

"We had a meeting last night with the governor and, based on the government's estimates, initially there are 10,000 casualties [dead], said Soria.

As rescue workers struggled on Sunday to reach ravaged villages along coastal routes on Sunday, an official death toll had not been declared.