Millions of Germans tuned in to a television film about the 1945 sinking of a Nazi ship full of refugees in the Baltic, which cost 9,000 lives and surpassed the Titanic as the worst maritime disaster in modern times. 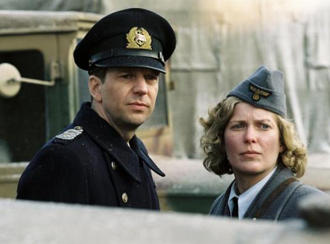 "Die Gustloff," a two-part multi-million euro movie shown on German state broadcaster ZDF, was the most-watched TV program on Sunday, March 2, with 8.45 million people tuning in. The second half of the three-hour film will be broadcast on Monday evening.

The "Wilhelm Gustloff" had been built to hold 1,500 passengers. The 209 metre-long (685 feet) ship, named after the assassinated head of the Swiss Nazi party, was launched in 1937 and conceived as a cruise liner for the Nazis' leisure organisation Kraft durch Freude, or "strength through joy." Once war broke out, it was used by the German military.

But 10,000 refugees, many of them women and children, fleeing the advancing Red Army were on board the former Nazi cruise ship when it was sunk by torpedoes from a Soviet submarine on Jan. 30, 1945, in the Baltic Sea shortly after leaving the port of Gotenhafen (now Gdynia, Poland) in Gdansk Bay. The boat had not been flagged as a Red Cross transport.

Over 9,000 died in the icy water, six times more than were killed when the "Titanic" sunk after hitting an iceberg in 1912.

The "Gustloff" had been used as living quarters for sailors in Gotenhafen but was seen by many as the last chance to escape the advancing Soviet Army. Thousands collected at the port in temperatures of -18 degree (0 degrees Fahrenheit) to try to get a spot on the ship. 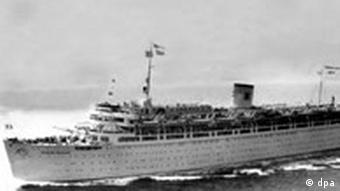 The ship sank 60 years ago

The movie, directed by Joseph Vilsmaier, was based on historical events, though the characters were fictitious. Vilsmaier and screenplay writer Rainer Berg consulted with survivor Heinz Schoen, then an 18-year-old assistant purser, to help get things right.

Vilsmaier tells the story through the perspective of a young captain in the merchant marine who tries in vain to prevent the ship from leaving port before an escort arrives to accompany it to Kiel.

The story of the "Gustloff" was relatively unknown until Nobel laureate Guenter Grass wrote about it in his 2002 novel "Im Krebsgang" (Crabwalk). 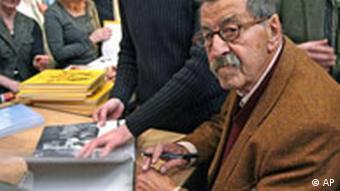 Guenter Grass wrote about the disaster in "Crabwalk"

Wilhelm Gustloff, a Swiss Nazi leader, was assassinated by a Jewish man named David Frankenfurter in 1936 and declared a martyr by the Nazis. Frankfurter was sentenced to 18 years in prison, expelled from the country and later worked for Israel's defense ministry. Switzerland only allowed him to enter the country in 1969.

Germany's broadsheets gave the movie bad marks, criticizing its embellishment of the events. The film had failed due to very basic "shortcomings of the script and the directing," the Frankfurter Allgemeine Zeitung wrote.

"More broadcasting time hasn't led to more broadcast quality," the Sueddeutsche Zeitung commented. "In the end the lovers found each other: the captain and his fiance. That's how it is in television. A deeper insight doesn't stick, just as little does from the place it's about, the Wilhelm Gustloff," the paper wrote.

The Frankfurter Rundschau even called the movie an "accident with history."

Search for Nazi Loot Kicks Off in Germany

German treasure hunters have begun drilling near the Czech border in search of priceless loot hidden by the Nazis. Information about the goods came from a man whose father was a former Luftwaffe radio operator. (27.02.2008)

Despite claims by the town's mayor that Klaus Riedel was a pioneer of German rocket science, others have criticized the town for naming its school after a man some claim was a Nazi weapons designer. (05.02.2008)

Have you heard of the "Wilhelm Gustloff" disaster? Send us an e-mail. Please include your name and country in your reply.