For the first time in more than 50 years, the German and Turkish national teams are facing off in a big tournament. Many Turks in Germany are clear on where their allegiances lie when it comes to the game: Turkey. 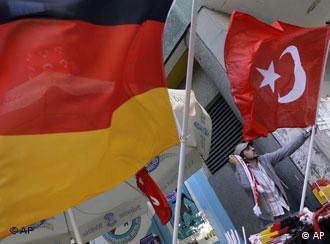 German-Turkish soccer fans can choose between two flag to wave, or wave both

Attila Tas was 19 when he left Turkey in 1960 to come to Germany. Today, at the age of 60, he's lived two-thirds of his life in Germany and considers it his home. Still, he doesn't miss a beat when asked which team he'll be rooting for when Germany faces off against Turkey in the semi-finals of the EM 2008 on Wednesday night.

But Tas, who owns a small shop in Kreuzberg, a Berlin neighborhood with a large Turkish population, said he was relaxed about the outcome of the game.

"But who wins or loses isn't that important, really," he added, standing in the middle of a colorful explosion of Turkish and German flags and soccer paraphernalia. "It's more important that it stays friendly. And if the Germans win, we'll support them in the final."

The semi-final match tonight has an already soccer-crazed Germany in emotional overdrive. In Berlin alone, some half a million people are expected to come out to the area around the Brandenburg Gate to watch the game, at least another 20,000 to a public viewing area in the western part of the city. Much of the nation will be glued to some sort of screen tonight at 8:45 pm central European time.

But the game tonight has special significance for Germany due to the nation's 2.6 million residents who are Turks or of Turkish descent. Many of them came to Germany when they were young as part of the country's "guest worker" program, or were born here. 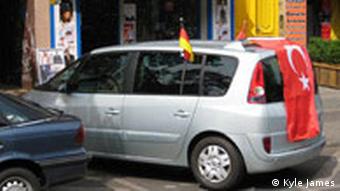 Fans show with their cars that they're fans of both teams, although one take priority

While they often follow the German Bundesliga games and root for Germany in international competitions, when it comes to deciding between their primary sporting loyalties, the crescent and star generally wins out over the black, red and gold.

"My child was born here and plays soccer with German kids, but tonight, he'll be rooting for Turkey," said Süleyman Selcuk, who has been an editor in the Berlin office of the Turkish paper Hürriyet for 25 years.

"That's how most Turkish young people feel whom I've spoken to," he said. "Germany is our home, but Turkey is the motherland. You support the motherland."

But despite the fact that many Turks appear to be ready to turn their backs on Ballack and company for at least 90 minutes this evening, it could be just a temporary thing. Selcuk added that if Germany, which is favored tonight, does emerge victorious, his son will quickly throw his support to the home team. 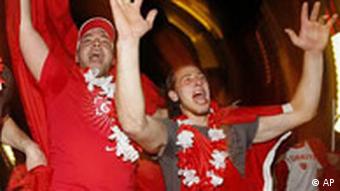 Experts say that while many first-generation Turkish immigrants had a difficult time ever feeling at home in their adopted country, for many of their children, questions of identity are more fluid. They have a strong cultural bond with Turkey, but possess a German identity as well.

In fact, it's not uncommon to see both Turkish and German flags fluttering from cars, balconies, shops and cafés. This two-sided nature of things has led many Turkish soccer fans in Germany feel they're in an enviable position regarding the match-up tonight.

"We don't really have anything to lose," said Sadat Kesecek, head of the UFUK Turkish Cultural and Sporting Association in Cologne. "If Turkey wins, we win. If Germany wins, we win, too. Why should we be disappointed. We'll celebrate with them."

Despite the talk of good sportsmanship and hopes for a friendly match that could be heard on the streets of Kreuzberg on Wednesday, there were also a few echoes of the sometimes fraught relationship between ethnic Germans and Turks. 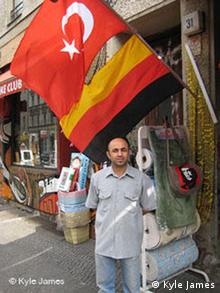 "The Germans don't like all we've accomplished here," said 21-year-old Akin Azik, pointing to the Turkish-owned businesses around Kottbusser Tor in Kreuzberg. "That includes coming this far in the tournament. The Germans are two-faced."

But his view appears to be a minority one. For most Turks, tonight is a chance to have a good time watching two well-performing teams -- both of which many have an emotional bond with -- face off against one another to secure a spot in the final. And afterwards, to celebrate until probably very late into the night.

"It's just a little ball and a 90-minute game," said Erogan Tunc, 36, owner of the Tunc Export shop in Kreuzberg. "But it's like little Istanbul here, and it's just going to go crazy."

Several of Turkey's top players were born and raised in Germany. The absence of Turks on Germany's the national team is a sore point leading into this week's semi-final showdown. (24.06.2008)

Germany take pride in being the only 2006 World Cup semi-finalist to have reached the same stage at Euro 2008 but not even their great track record at big events will make them underestimate Turkey, said coach Jogi Loew. (23.06.2008)