Turkish textbooks under fire in German schools | Germany| News and in-depth reporting from Berlin and beyond | DW | 21.06.2013

Education experts in Germany have called for a ban on some textbooks issued by Turkish authorities for use in German schools. They say the books have a biased view of history. 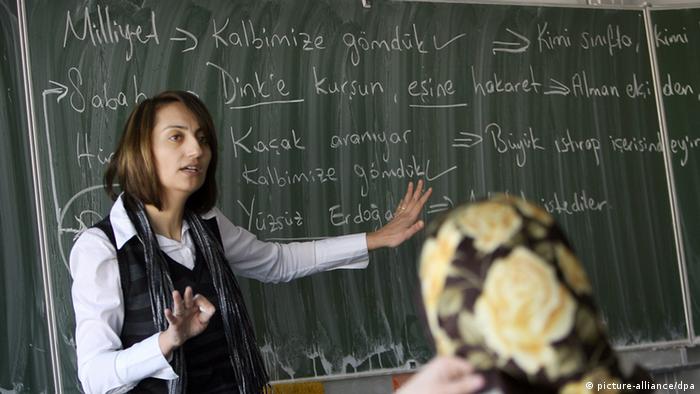 Swearing an oath to the Turkish motherland is a normal part of school life in Turkey. In German classrooms, however, it is causing a stir. "It's my goal to protect the young, honor the aged and love my country and motherland more than myself."

It is a quote from the "Türkce ve Türk Kültürü" ("Turkish and Turkish culture") textbook that many teachers in Germany are using to teach pupils in Germany of Turkish origin in Turkish.

It was specifically issued by the Ministry for National Education of the Republic of Turkey in Ankara for use abroad. The Turkish consulates in Germany sent the books out to all Turkish teachers in Germany, claiming that there simply wasn't a better choice that could be used everywhere.

At odds with teachers in Germany 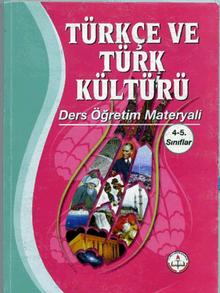 This set of books has raised a stir in Germany

But that's not so, said Hassan Taschkale, who is responsible for multicultural politics at the Education and Science Union in the western state of North Rhine-Westphalia. "There is sufficient and very good material out there, that's why I'm not using these books," he explained.

"It seems the government in Turkey is trying to impose its rituals on German-Turkish students, too," he claimed.

The contentious textbooks have primarily been used in North Rhine-Westphalia, as teachers there are free to use additional material that is not normally included in the curriculum.

After many schools complained about the textbooks' content, the union has called for the books to be banned.

The group said it fears the texts are too nationalistic and, in places, present a skewed view of history. The state's School Ministry is investigating those claims.

A right to Turkish culture and language?

The Turkish Embassy in Germany would not comment on the commotion surrounding the textbooks, instead pointing out Germany's policy of not recognizing dual citizenship. "The people between the ages of 18 and 23 who chose Turkish citizenship regrettably lose their German citizenship according to German law," the embassy said. "If you look at these young people as future Turkish citizens, then it is their right to get to know their culture and langauge." 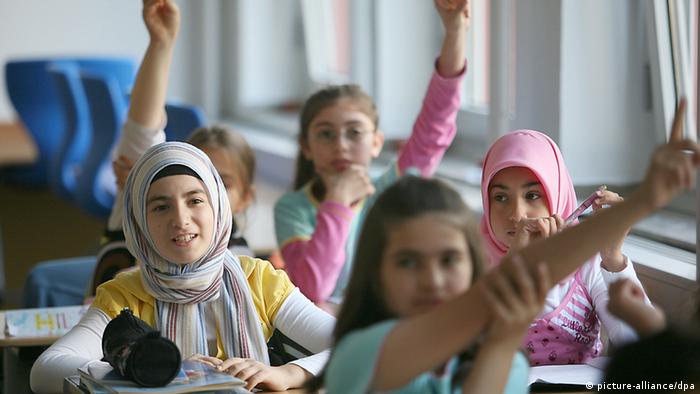 Lessons in Turkish aim to teach students about their heritage

The third volume of the textbook says that Armenians joined the Russians and English in 1915 and tried to weaken the Ottoman Empire. According to the text, the Armenians contractually agreed to give up their lands after the First World War. There is, however, no mention in the book of the expulsion and murder of up to 1.5 million Armenians.

"What is cited about the genocide is a real problem," said Barbara Christophe of the Georg Eckert Institute for International Textbook Research, adding that she was not surprised as the book represents the same view of events taken by textbooks in Turkey.

While Christophe said it was good the book touched on the conflict with Armenians, which had been completely denied by school texts as late as the 1990s, she said it was done in an unacceptable manner. "This is naturally a representation that one cannot consent to," Christophe said. 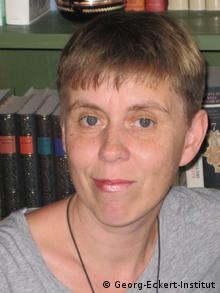 Christophe said improvements could also be made to German textbooks

She also said Germany sets a standard for its history textbooks that is not comparable to other countries. Due to its Nazi history, Germans are particularly careful about the presentation of historical context. Christophe said school kids in Germany are always informed about history's ethical dimensions in addition to factual data published in history books. This often means students believe they have adequately addressed a given topic and do not need to grapple with it personally. "That leads kids to think that what they are learning has nothing to do with them," Christophe said.

She had a more positive view of British textbooks, "They try to show the historical dilemmas and create an understanding for how a person acted at a certain point in history." Such an approach to history could be an example for Turkish textbooks, Christophe added.

When it comes to integration, the textbook expert said German school books are less than satisfying. Christophe participated in a study of the presentation of migrants and migration in German textbooks where she said she found outdated views.

"There are phrases that exclude children with foreign heritage," she said. "Sentences like 'the Muslims are people who need our understanding' can still be found today in German textbooks."

That was one reason Christophe said discussions about the controversial Turkish textbooks should not only point the finger at Turkey but also look at how integration can be improved here in Germany. Banning the books from being used, she said, would send the wrong signal.

At an annual conference, Muslim organizations in Germany will discuss changes they hope will lead to more parity with German Christians. But the event has drawn criticism both from participants and others. (06.05.2013)

An arts project for children in Bonn exemplifies the ways in which a number of Germans are marking the International Weeks Against Racism, which run in 2013 from March 11 to 24. (18.03.2013)