Turkey's government to extend state of emergency until January 2017

Turkey's cabinet has announced it will extend the state of emergency imposed after a failed coup attempt until January. Parliament needs to approve the decision, which is considered a mere formality. 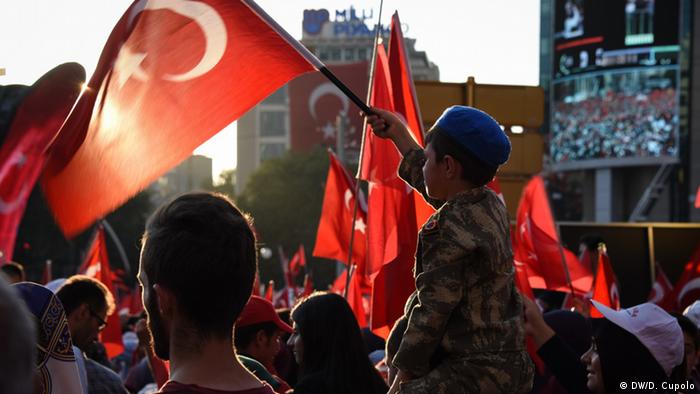 "The state of emergency will be extended for another 90 days starting October 19," Deputy Prime Minister Numan Kurtulmus told journalists in Ankara on Monday following a cabinet meeting in the Turkish capital.

The announcement came after Turkey's National Security Council recommended that the state of emergency be extended. It was initially implemented on July 21 after the failed coup on July 15.

The extension will continue until January 2017, provided parliament approves the decision. However, this is being considered a mere formality because President Recep Tayyip Erdogan's Justice and Development Party (AKP) holds an absolute majority in the chamber. The far-right Nationalist Movement Party (MHP), which is part of the ruling coalition, also supports emergency laws and prolonging the status quo.

President Erdogan said last week that it could be necessary to keep the state of emergency at least for one year. He defended his actions, saying France had done the same since "Islamic State" (IS) militants attacked Paris last November.

President Erdogan launched a crackdown on Turkish government officials, police, judges, journalists and teachers after a coup attempt on July 15 failed to depose him. Nearly 35,000 people have been arrested since then and more than 50,000 people fired from their jobs for allegedly supporting the Gulen movement, led by Muslim cleric Fethullah Gulen, who is based in Pennsylvania in the US.

The coup attempt and subsequent unrest followed a redoubled military offensive against the Kurdish PKK in southern and southeastern Turkey, launched as peace talks with the Kurds petered out.

On Monday, Turkish authorities said that they had arrested one of Gulen's brothers in the western coastal city of Izmir, the state-run Anadolu Agency reported. According to Anadolu's report, Kutbettin Gulen had been sought on charges of "membership in and leadership of a terrorist organization." He was detained at a friend's home in Izmir on Sunday. Kutbettin Gulen had participated in a 2014 press conference with other relatives in support of Fethullah Gulen, Anadolu said.

Nigeria: Kidnapped American rescued by US special forces 1h ago