Turkey′s foreign policy not exclusively focused on Europe anymore | Asia | An in-depth look at news from across the continent | DW | 26.04.2010

Like China, Brazil or the EU, Turkey in recent years has upgraded its engagement with Africa. Ankara's new interest in Africa is not just economically driven, but exemplifies a recalibration of Turkish foreign policy. 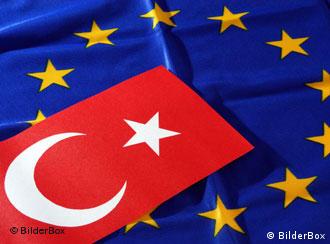 With a large delegation of some 150 business leaders and politicians in tow, Turkey's President Abdullah Gul embarked on a maiden trip last month. Cameroon and the Democratic Republic of Congo were the destination for Gul and his entourage: a debut for a Turkish president with the goal of strengthening bilateral ties with the two African nations.

Africa until recently didn't feature much on Ankara's political agenda. That area had been firmly occupied by the European Union and Turkey's quest for membership in it. But since 2008 at least, a reorientation of Turkish foreign policy has taken shape and has become steadily more visible publicly as well.

Two years ago, Ankara convened its first cooperation summit with Africa which led to Turkey's designation as a strategic partner by the African Union and plans to hold summits every five years. The next one is planned for 2013 in Africa.

While Turkey's branching out to Africa is significant in and of itself, it must be seen in a larger context that extends far beyond Africa.

"They also call it the neo-Ottoman foreign policy which is supposed to be much more proactive generally as a global player," she told Deutsche Welle.

This reorientation of Turkey's foreign policy that had started before he took office, became more pronounced since Ahmed Davutoglu, an influential academic who has published numerous papers about Turkey's role in the world, became foreign minister last year.

Thomas Diez, a professor of international relations at the University of Tuebingen, gives Turkey's new foreign policy approach a good grade overall, but cautions against designating it as a neo-Ottoman strategy as has been done by politicians and analysts inside Turkey and abroad:

"I think one has to be careful with this. I think we should be aware that once we make those linkages we plant things in certain ways and therefore link them with associations which I find very problematic," he told Deutsche Welle. 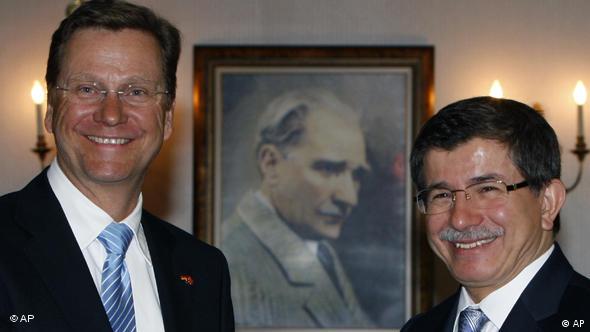 What's more, argues Diez, the reasons for Turkey's foreign policy shift are much more mundane than the label neo-Ottoman belies. One is simply the economic expansion of a country which has the potential to grow into becoming an important player in international business.

The second factor is an internal realignment within the country away from idea of a sole orientation toward the West by the founder of the Turkish republic, Kemal Ataturk. "And of course, the Africa policy goes far beyond what used to be the Ottoman empire I should hasten to add," says Diez.

While Turkey's troubled bid for EU membership has influenced Ankara's broadened global perpective, it didn't trigger it, say the experts.

"I don't think they have formulated this policy because relations with the EU have stalled in the last couple of years and because accession negotiations are not going as they were planned," notes Duezgit.

Unlike in the 1980s and 1990s Turkey doesn't perceive relations with the EU as a mutually exclusive partnership. "The official Turkish foreign policy line here is that we can have good relations both with our neigbors and also in the wider global network of countries and also with the European Union," says Duezgit.

Ankara's branching out may actually boost its chances of ultimately joining the European Union.

"I think that Turkish foreign policy in general has taken a road that is rather beneficial to an EU membership," argues Diez and cites Davatoglu's strategy of opening Turkey up to its neighbors, working actively to solve the Cyrus conflict and striving for reconciliation with Armenia.

"I think all these issues have made Turkey in many ways more in tune with what the EU would regard as a considered foreign policy." 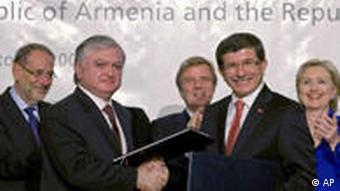 Turkey has made steps toward normalizing ties with Armenia

This in turn allows Turkey to make a different and much more pragmatic claim why it should be a member of the EU. The earlier argument held that Ankara belongs to Europe due to its historical, cultural and political connections.

But regardless of its chances for EU membership, it seems Turkey has firmly settled on its realigned foreign policy approach. In the past two years it has opened five new embassies in Africa. Ten more are slated for the coming years.

Armenia puts deal to restore ties with Turkey on hold

Armenia has suspended a deal to end decades of hostility with its neighbor Turkey. It accuses Ankara of adding new conditions to the agreement that is intended to restore diplomatic relations and reopen border crossings. (22.04.2010)

Improving the rights of religious minorities in Turkey is a major hurdle for the country's bid to join the European Union. The government has now begun to reach out to its main religious minority, the Alevi. (08.04.2010)

Merkel arrives in Turkey in effort to settle growing differences

Germany resistance to full Turkish membership of the EU is one thorny issue to be addressed as Chancellor Angela Merkel visits Ankara. Discussions are planned on a series of issues, including integration of immigrants. (29.03.2010)