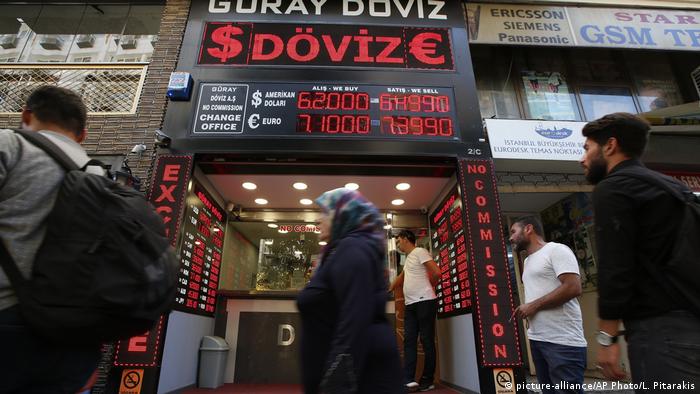 A Turkish currency exchange pictured during a lira plunge in 2018

Erdogan's move pushed the lira down as much as 15% against the dollar from Friday's rates. The lira managed to quickly recover some of those losses after Finance Minister Lutfi Elvan assured markets that Turkey was committed to free market rules and to a liberal currency exchange regime.

The Istanbul stock exchange briefly paused trading on Monday morning after its main index fell by more than 6%.

"There will be absolutely no move away from the free market mechanism," Elvan said in a statement, adding that Turkish macroeconomic policy is focused on securing a "permanent drop" in inflation.

What caused the plunge?

Foreign investors have also been rattled by what they consider as increased political control in Turkey over the market. Kavcioglu will be the third central bank chief abruptly installed by the president since mid-2019.

In a statement on Sunday, Kavcioglu tried to reassure markets that the central bank is committed to fighting inflation.

The bank "will continue to use monetary policy tools effectively in line with its main objective of achieving a permanent fall in inflation," Kavcioglu said.