Reports from state-run media say jets have carried out airstrikes against Kurdish rebels in Turkey and northern Iraq, killing as many as 40 militants. A suspected PKK attack on minibus kills 14 police officers. Meanwhile, a Tuesday morning bomb attack on a minibus in the eastern province of Igdir near the border with Azerbaijan has killed at least 14 police officers, the state-run Anadolu news agency reported.

The overnight air raids came after at least 16 Turkish soldiers were killed in the Kurdish-dominated southeast of the country on Sunday in an attack blamed on the PKK. Some 35 F-16 jets and 18 F-4 phantoms took part in the heavy raids on a score of PKK targets, according to Anadolu.

PKK to be 'wiped out' 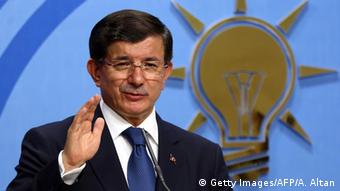 The Turkish government has vowed to eradicate PKK rebels after Sunday's attack -- which was by far the deadliest in the latest flare up of the PKK's three-decade-long armed struggle against the Turkish state.

The PKK, which enjoys popular support in Turkey's southeast, is designated a "terrorist organization" by Turkey, the European Union and the United States.

A ceasefire from 2013 collapsed this summer after the Turkish government resumed air attacks on militants camps based in the mountainous border region between Turkey and Iraq.

With deadly violence through much of the restive southeast, speculation remains as to how Turkey will hold parliamentary elections slated for November 1. The president ordered a re-vote after the ruling party failed for the first time in a decade to secure a majority and talks to form a coalition went nowhere.

The pattern of deadly attacks have triggered nationalist anger against ethnic Kurds. The Istanbul branch of the pro-Kurdish Peoples' Democratic Party (HDP) said on Twitter that 126 of the party's buildings around the country were attacked on Monday as Turkish newspaper articles carried accounts of nationalist crowds attacking ethnic Kurds working as seasonable laborers.

About 2,000 people overran a state construction project in Erzurum province, angry with a group of ethnic Kurdish builders suspected of being PKK sympathizers, the leftwing daily BirGun said.

"I am calling on all my brothers. No matter what they do... do not harm our brotherhood," Demirtas told reporters. "Kurds, Turks embrace each other. The best medicine against all the provocations is peace."

Meanwhile, the PKK handed over 20 Turkish customs officials to human rights groups in northern Iraq on Tuesday, weeks after abducting them in the southeastern provinces of Hakkari and Van, the Turkish Human Rights Association said.

'The mountains are not a place for a winter holiday'

The Turkish army is bombarding the mountains in Northern Iraq in retaliation for deadly attacks by the Kurdistan Workers' Party (PKK), however a former PKK fighter says 'they can't win against the PKK in the mountains.' (21.10.2011)