Turkey has summoned Sweden's ambassador after Stockholm accused Ankara of legalizing sex with children. The row follows an earlier dispute with Austria over the same issue. 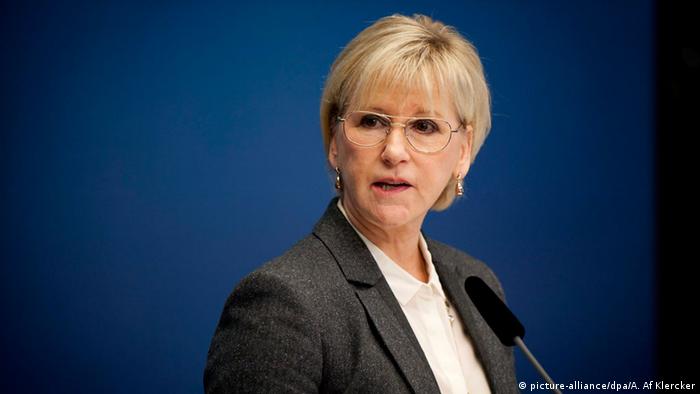 Swedish Foreign Minister Margot Wallström had tweeted on her official account that the "Turkish decision to allow sex with children under 15 must be reversed", following a controversial ruling by the Turkish constitutional court.

Turkey's constitutional court in July had annulled a criminal code provision punishing all sexual acts involving children under the age of 15 as "sexual abuse", giving a six-month period for parliament to draw up a new law. The lower court that had brought the petition forward said it was worried there was no distinction between cases of sexual acts involving a young teenager or a toddler. Cases in the meantime would be reviewed individually.

The legal age of consent in Turkey remains 18 and was not affected by the ruling. However, it also drew a furious response from activists who said they were worried the ruling could open the way for unpunished child sexual abuse.

The dispute comes as the latest in a number of spats highlighting rising tensions between Turkey and EU states in the wake of the botched July 15 coup.

Turkish Foreign Minister Mevlut Cavusoglu said it was "a scandal for a foreign minister to post such a tweet based on false news or speculation," adding that the Swedish ambassador to Ankara had been summoned to his ministry.

Cavusoglu also said that Wallström had failed to act "responsibly".

"A foreign minister should not tell lies and should not adopt an approach accusing Turkey," Cavusoglu said. He also stressed that the Turkish government was determined to fight child abuse and added the justice ministry was currently working on new rules.

Ankara had also summoned the Austrian charge d'affaires last week in protest over a news slide seen at Vienna airport about the same age of consent controversy. The news ticker - which was shown above an arrivals board and supplied by mass-circulation daily newspaper "Krone" - said that Turkey was going to "allow sex with children under 15."

Turkey: Austria is the capital of radical racism

Turkish Foreign Minster Mevlut Cavusoglu accuses Austria of radical racism in a row over EU membership talks. He hit back at Chancellor Christian Kern's comments that the accession plan was "nothing more than fiction." (05.08.2016)

The head of Austria's far-right party has likened the failed coup in Turkey and subsequent purges to the burning of the Reichstag in Nazi Germany. Turkish President Erdogan has firmly denied any coup involvement. (06.08.2016)

Cavusoglu hit back at the charges, saying the allegations were driven by growing racism and Islamophobia engulfing the European continent.

"It is alarming that the slander campaign that started in Austria - the capital of racism and Islamophobia - is spreading into Sweden which is actually more sensitive on human rights," he said.

Ties between Turkey and Austria have been strained after a number of Austrian politicians spoke out against Turkey's longstanding bid to join the EU, particularly after the vast purge that followed the coup bid. Austrian Defence Minister Hans-Peter Doskozil has even compared Turkey to a "dictatorship".

European countries have deep voiced concern over Turkey's crackdown on dissidents, in particular alleged supporters of a religious movement led by the US-based cleric Fethullah Gulen, whom Ankara claims had orchestrated the July 15 coup attempt, which saw at least 270 people killed.