Turkish authorities have arrested two prominent reporters on charges of assisting terrorism. They had published video footage online that allegedly tied the country's state intelligence agency to Islamists in Syria. 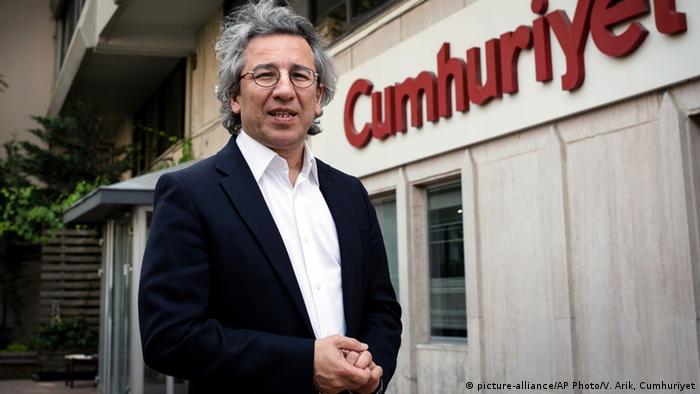 A court in Istanbul accused Can Dündar (pictured above) and Erdem Gül, two journalists with the opposition daily "Cumhuriyet," of "divulging state secrets" and "spying in aid of terrorist organizations."

In May 2015, the two journalists had published a video on the newspaper's website dating back to January 2014 that allegedly showed Turkish police open Syria-bound crates of weapons and ammunition on trucks belonging to Turkey's intelligence agency, MIT.

Dündar, 54, the newspaper's editor-in-chief and a well-known veteran journalist in Turkey, and Gül, the paper's Ankara bureau chief, have both been taken into custody, as social media users across Turkey voiced their criticism at the recently-elected government's tough stance on journalists.

Dündar had previously said in anticipation of the Justice and Development Party's (AKP) election win on November 1 that Turks had to brace themselves "for a period of heightened repression."

The arrests have brought the issue of press freedom in Turkey to the fore once again. The country continues to rank as one of the worst places for practicing freedom of speech according to global press freedom indexes.

In August, Turkey had detained three journalists reporting for Vice News in the predominantly Kurdish southeast region, one of whom remains in custody. Later in the summer, the office of the Turkish daily "Hurriyet" was raided and vandalized after criticizing the president's increasingly authoritarian leadership style. Other attacks on press freedom have since ensued, including arrests at the popular current affairs magazine "Nokta."

Turkish President Recep Tayyip Erdogan, whose AKP has governed Turkey since 2002, gave a television interview with state broadcaster TRT, where he said that he would "not let this go."

"The individual who has reported this as an exclusive story will pay a high price for this," the Turkish president said, adding that he had personally filed the criminal complaint against Dundar, demanding that he serve multiple life sentences.

"These allegations against the national intelligence agency and this illegal operation are some kind of espionage activity," Erdogan added. "This paper is now involved in this espionage."

Erdogan has previously attacked news publications, including titles published abroad, saying that the UK-based "Guardian" should "know its limits" and attacking the US daily "The New York Times", saying there was "Jewish capital behind it, unfortunately."

Turkish Prime Minister Ahmet Davutoglu, meanwhile, made comments defending the truck shipment, saying that they were carrying aid for Turkmen fighters without further specifying their content.

"It is nobody's business what was inside the trucks. Yes, there were serious clashes in Syria and we helped the Turkmens," Davutoglu said in a television interview with the Turkish news channel Haberturk.

An online survey conducted by Türkiye Anket soon after the indictments said that less than 20 percent out of 83 participants thought the journalists had committed treason, while 76 percent said that the news report about the alleged arms deliveries to Syria was an outstanding achievement for journalism.

European responses toward the issue of press freedom in Turkey have become more subdued as Turkey has become a key ally in coping with the refugee influx across the continent as well as in the fight against the self-styled "Islamic State" (IS). Turkey, a NATO member and EU membership candidate, is expecting to finalize a major deal on the refugee crisis in coming days, shortly after securing 3 billion euros ($3.2 billion) to help Turkey host more Syrian refugees.

The former editor-in-chief of Turkish opposition newspaper Cumhuriyet was charged with terrorism and espionage. He fled to Germany in 2016, amid Ankara's crackdown on journalists after a failed coup.

An arms dealer who had started to expose Turkey's clandestine arms trafficking networks was snatched during a Turkish intelligence operation. The whistleblower had claimed kickbacks reached the highest offices in Turkey.