A court has sentenced Hikmet Cetinkaya and Ceyda Karan to two years in jail for republishing cartoons of the Prophet Mohammed from the French monthly Charlie Hebdo. The verdict has raised questions about press freedom. 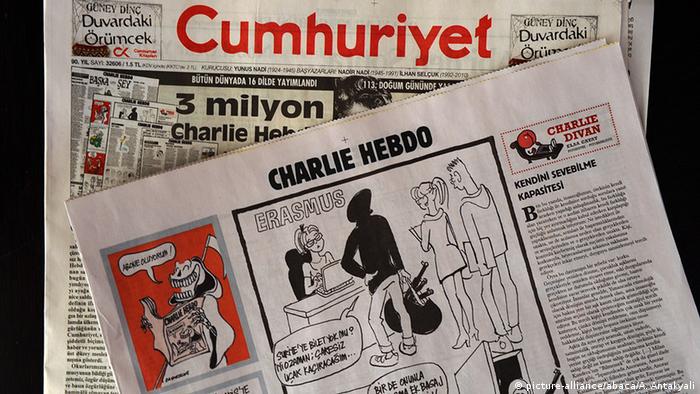 "The two journalists were sentenced to two years each in jail," Cetinkaya and Karan's lawyer, Bulent Utku, told journalists. "We will appeal the ruling at the appeals court," Utku told AFP news agency.

The anti-government Cumhuriyet daily, which employed both journalists, reported that the initiators of the lawsuit chanted "Allahu Akbar," or "God is greatest," after the verdict was read out.

The controversial graphic showed an image of the prophet shedding a tear and holding a sign saying "Je suis Charlie." The slogan became a symbol of protest against terror attacks after self-declared "Islamic State" (IS) militants gunned down several employees of the French satire magazine in Paris in January 2015. 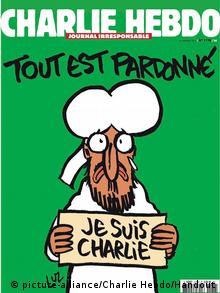 Around a week after the killings, the two Turkish reporters, Cetinkaya and Karan, decided to publish a four-page Charlie Hebdo feature to mark the magazine's first edition after the attacks. The weeping prophet's picture was included twice in the pullout to illustrate columns by the two journalists.

Any visual representation of the prophet is considered blasphemy in Islam and Cumhuriyet received many threats after the edition was published. Prime Minister Davutoglu criticized the daily, describing the act as an "open provocation."

Cetinkaya and Karan were subsequently put on trial on charges of "inciting public hatred" and "insulting religious values."

Writing on her Twitter account on Thursday, Karan said, "Let our two-year sentence be a gift for our liberal fascists."

Reporters Without Borders slammed the verdict, calling it "shameful" and "unbearable."

Concern has been growing about the treatment of reporters under President Erdogan. Trials for insulting the president have been on the rise since he assumed his position in 2014. There are 20,000 such cases currently open.

The prosecutor has called for the four academics to be tried on charges of insulting the Turkish nation. They were charged with spreading "terrorist propaganda" after criticizing Ankara's crackdown on Kurdish rebels. (22.04.2016)