The Turkish premier has praised the bravery of police after a suicide bomber struck at an Istanbul police station, killing one officer. The motive of the woman, who spoke English during the attack, is being investigated. 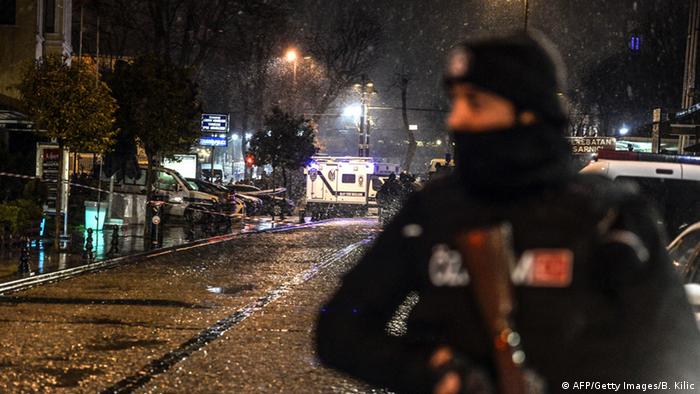 Turkish Prime Minister Ahmet Davutoglu said on Tuesday evening that police had managed to prevent worse casualties, with not all of the explosives having been detonated. Two other bombs were safely defused, he said, praising the work of officers.

"Police intervened immediately and prevented worse casualties," said Davutoglu. "The bravery of our security forces who sacrificed themselves prevented there being an even larger toll."

Officials said there was no clue as yet as to the nationality or identity of the bomber, who died in the attack.

"The widest investigation is to be undertaken to determine which organization could be connected to the attack," Davutoglu said in televised comments, but refused to speculate further.

The female assailant was said to have entered the police station in the Sultanahmet district, detonating the explosives she was carrying on her at about 5 p.m. local time (15:00 GMT).

Istanbul governor Vasip Sahin told Turkish television that the woman had spoken English to officers manning a post meant to help tourists near the Hagia Sophia museum and Blue Mosque. Emergency services were quickly called to the scene and a local tram line halted.

"She approached the police… saying in English: 'I have lost my wallet.' That's all I can say," Sahin said. "We are trying to identify the attacker."

The attack on police is the second in a week. Five days earlier, police subdued a man who had thrown hand grenades and fired a weapon at officers on guard duty at the Ottoman-era Dolmbahce Palace.

Both grenades hurled by the man, named as Firat Ozcelik, failed to explode. That attack was claimed by the Revolutionary People's Liberation Party-Front, a group that espouses a Marxist-Leninist ideology.

A variety of groups have targeted security forces in Turkey in the past, including Kurdish insurgents, nationalists, Islamists, and left wing groups.