European leaders have warned that a visa-free travel deal for Turkey might fail unless Ankara changes its anti-terrorism law. The Turkish president has refused to budge and accused the EU of "hypocrisy." 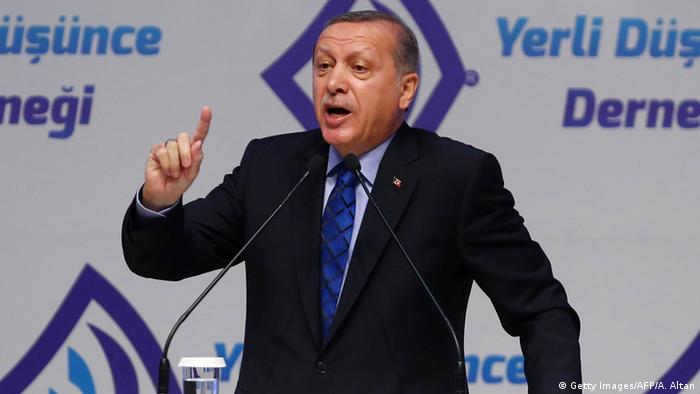 European Commission head Jean-Claude Juncker urged Ankara to comply with EU terms on Thursday, as the two sides appeared to be at an impasse over lifting visa requirements.

Brussels insists that Ankara change a number of its regulations, most notably its strict anti-terror law.

"We consider that it is important for these conditions to be fulfilled; otherwise this deal between the EU and Turkey will not happen," Juncker said.

In turn, Turkey claims that it had already fulfilled all the necessary terms. Brussels is also under pressure to find a solution, as failure on visa liberalization could break the larger deal with Turkey on stemming the wave of refugees.

"If Mr. Erdogan wants to pursue his strategy, then he has to answer to the Turkish people why Europe is denying free travel to Turks," Juncker said on Thursday. "That's not my problem; that will be his problem."

EU and Turkey at loggerheads

'Ball is in Turkey's court'

German Foreign Minister Frank-Walter Steinmeier echoed the sentiment, saying that the EU was waiting to see "the readiness of Turkey to end persecution of journalists through the usage of an anti-terror law."

"I don't have an influence on that, the ball is in Turkey's court," he said in Berlin.

At a separate press conference, German Deputy Chancellor Sigmar Gabriel also said that reforms were needed before visa-free travel in the EU could be granted to Turkish citizens.

Gabriel urged Ankara to "allow the opposition and journalists to do their jobs" rather than use the law to "brand them as terrorists so that they can lock them up."

Turkey has repeatedly stated that the tough laws were needed for fighting Kurdish militias in the country.

Speaking to his supporters in Ankara, Turkish President Erdogan lashed out at the EU, implying that some members of the block were aiding terrorist groups.

"They say: Go and divide Turkey!" he said. "Do you think we don't know that?"

"Since when are you running this country? Who has given you the authority?" he added, addressing the European leaders.

"They believe they have a right for themselves (to fight terror) but find it a luxury and unacceptable for us. Let me say it clearly - this is called hypocrisy."

Despite the harsh rhetoric, European Commission spokesperson Margaritis Schinas said that the deal was not "dead," and that Brussels was still working towards implementing it.

"We want the process to continue, but it would be unacceptable for Turkey if it is postponed in an unfair fashion," Volkan Bozkir told a news conference in Strasbourg.