Turkey has arrested 14 lawyers whom Ankara accuses of having terrorist ties. The case is related to that of two jailed teachers on hunger strike and adds to an unknown number of lawyers now sitting in Turkish prisons. 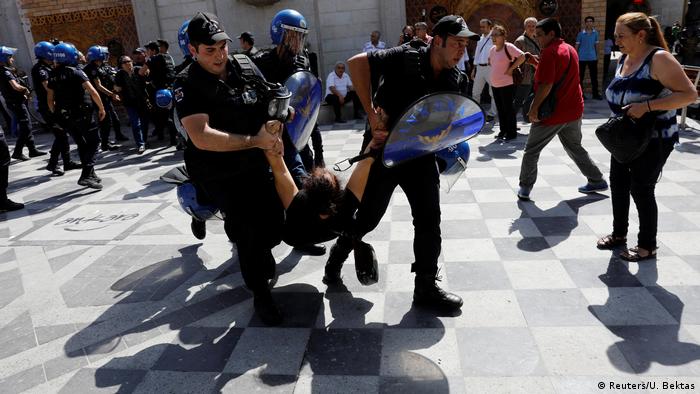 Protesters supporting the teachers were detailed earlier this month

Turkish authorities have arrested 14 lawyers they said are members of an "armed terrorist organization." The lawyers were among a group of 16 detained last week, although two of those originally detained were later released under judicial control.

The lawyers are accused of having ties to the Revolutionary People's Liberation Party (DHKP-C), a leftist organization that has carried out violent attacks and is staunchly anti-Western. The government has labeled DHKP-C a terrorist group. The daily newspaper Cumhuriyet, which is critical of the government of Turkish President Recep Tayyip Erdogan, reported that the lawyers were all from a law firm involved in the defense of two jailed teachers currently on hunger strike.

The teachers, Nuriye Gulmen and Semih Ozakca, were both dismissed from their jobs for alleged ties to DHKP-C in late 2016 as part of the purge that began in the wake of the July 2016 failed coup attempt. After the two were fired, they began protesting in central Ankara on a daily basis before beginning their hunger strike on March 9, 2017. Two months later they were arrested and charged with being members of "an armed terrorist organization," as well as "making the propaganda for it."

Although the two vociferously denied the accusations, the government insists that they have a history of criminal activity, including participating in "unlawful" gatherings and demonstrations and creating "terrorist" propaganda. Their supporters claim the two were arrested because their protests and hunger strike were an embarrassment to the government.

Last week a Turkish court ordered that the two remain in jail despite calls for their release due to the grave state of their health. 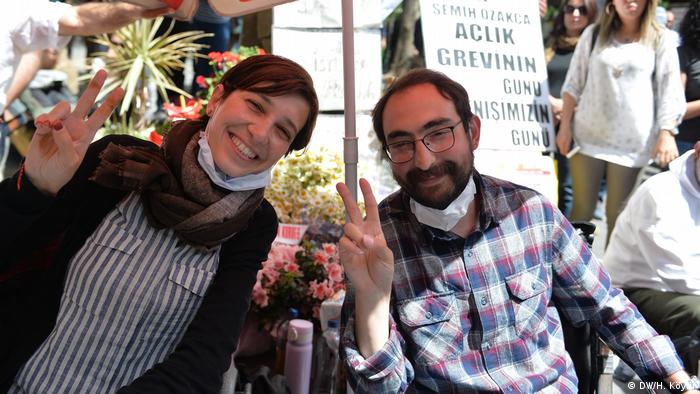 The Union of Turkish Bar Associations said many lawyers are currently behind bars in the country, though it says the exact number is not known. Some 50,000 people have been arrested since last July and more than twice as many have been detained during that same time.

Following the failed coup attempt, Erdogan initiated a crackdown on academics, journalists, politicians, police and members of the military and judiciary, jailing hundreds and firing thousands.

Read more: Turkey takes its nationalism with a dose of Islam