A majority of Turks have lost confidence in the EU membership process. For the government it is still a worthwhile goal, but no longer indispensable. 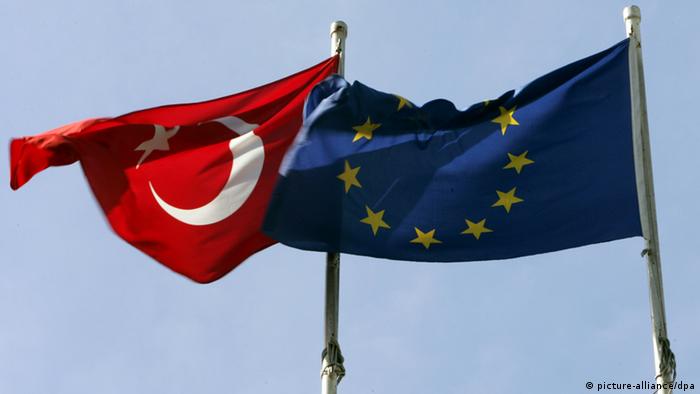 Sitting in the European Union's waiting room for 25 years has not altered Turkey's goal of full membership. But the increasingly self-confident country now has a different view of the EU and is following a new strategy to attain its goal.

"EU membership is a strategic goal and a state policy of our country for more than half a century," Turkey's EU affairs minister and chief negotiator Egemen Bagis told DW. "We are not going to give up our strategic goal, due to the irresponsible policies of some short-sighted politicians in Europe," he said in a reference to strong opponents of Turkey in Europe, such as French President Nicolas Sarkozy, who has managed to freeze key parts of Turkey's membership talks.

Turkey is the longest-waiting country on the European Union's accession list. Twenty-five years ago, on April 14, 1987, Ankara officially applied for full membership. Its EU journey even traces back to 1959, when Turkey applied for associate membership to its precursor, the European Economic Community (EEC). 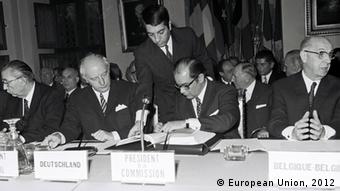 Since Turkey's formal application for EU membership, 15 countries have joined the club. Turkey, however, only started membership negotiations in 2005. Due to the unresolved issues, this process has almost come to a halt in recent years.

According to Minister Bagis, the obstacles Turkey faces today are unfair and politically motivated.

Dr. Cengiz Aktar of Bahcesehir University is a strong supporter of the reform process in Turkey and of EU membership. He says there is some degree of blame on both sides, for the long delay in the process and the current stalemate. Aktar is mainly critical of the EU's approach toward Turkey. "Since the beginning of this process, the EU did not treat Turkey on equal footing with the other candidate countries. Unfortunately, double standards have become one of the main characteristics of this process," he told DW. 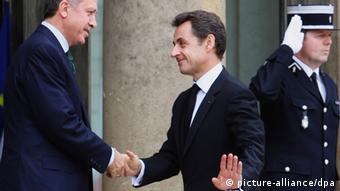 France has blocked key passages of the accession talks

Support for joining the EU dropped to 38 percent in 2010, while in 2004 a soaring 73 percent of the Turkish public said membership would be "a good thing," according to one poll by the German Marshall Fund.

The EU membership process had long been viewed in Turkey as an important economic and political anchor. The process led to key democratic reforms in Turkey between 2000 and 2005. Foreign direct investment significantly increased, facilitating Turkey's economic boom.

But, as Turkey's EU process entered a difficult period in 2005 and its full membership perspectives diminished, Ankara's approach to the EU cooled. Today, EU membership is apparently not a top priority for the ruling Justice and Development Party (AKP).

"The Turkish government is continuing its reform process, but in a selective way. I describe this as an ‘a la carte' reform process. The government is not adopting EU norms and standards in full, but making selections among them in line with its domestic political priorities," Dr. Aktar said.

Turkey's EU affairs minister, however, does not agree with these criticisms. "Despite politically motivated obstacles raised against our membership talks, we are following our reform agenda, and carrying out reforms to meet EU's standards," says Egemen Bagis. "In which European country today can you see such a fast reform track, such a strong political will for change, like we currently have in Turkey," Bagis stressed.

For EU membership, Turkey has to meet European standards in 35 major policy areas, which are covered in accession talks. While most of these 35 chapters are blocked due to the Cyprus issue and opposition by France, Ankara is continuing its harmonization program in all these chapters, with an aim to be ready, should blockage on the chapters eventually be lifted.

According to Bagis, Europe would gain from Turkey's eventual membership, and would address today's global economic and political challenges.

"Today we are the fastest growing country in Europe," he told DW, and underlined Turkey's strategic importance to the EU, with its geographical proximity to Europe's vital energy sources.

"Furthermore, Turkey has been among the few countries that inspires hope during the Arab Spring to the peoples of this region, with its success, with its commitment to democracy and freedoms," Bagis said. "For us, the EU is one of the major peace projects of history. And this project's existence depends upon integration and further enlargement," he said, implying that Turkey as an EU member would be a bridge to the Middle East. 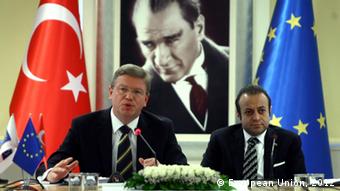 According to Cengiz Aktar ever since Turkey entered a new era under AKP rule, views of the political elite and ordinary people on the EU process have rapidly changed. A majority of Turks apparently have lost confidence in the EU membership process. For the government it is still a worthwhile goal, but not indispensable.

"The Turkish government has gained strong self-confidence. Even we can talk about overconfidence," Dr. Aktar told DW. "Ten years ago, the EU process was a kind of leverage for reforms. But recently, the EU has lost almost all of its influence in Turkey. Now the determining factor is internal dynamics, so the pace of reforms is slow and the outcome is limited," he said.

Dr. Aktar also pointed out a new trend in Turkish public opinion; a new perception of the EU. "In the past, there were various examples of euro-skepticism in Turkish public opinion. Now, with the increased self-confidence of Turkey, we are witnessing a new trend, what I call euro-sarcasm," he said. "This is a weird, but increasingly popular, approach. We increasingly hear opinions like 'Europe is in a difficult time,' 'Let us save Europe from the crisis,' and so on. Unfortunately, from time to time, the government is encouraging this approach with its populist statements."

Although Turkey's EU negotiations are in a stalemate, 25 years after its formal application for membership, Dr. Aktar is not pessimistic about the future. "Such ups and downs are usual in Turkey's decades-long EU process. It is possible to revive this process again," he said.

"For that, we have to first wait for the outcomes of presidential elections in France and next year's general elections in Germany. After that, both sides should sit down at the table and decide about the future of this process."

Dr. Aktar stressed, that in order to revive the process, the EU should give Turkey a reasonable date for possible membership. "Without such a concrete perspective, it would be almost impossible to regain the confidence of Turkey again," he said. "For me 2023, the 100th anniversary of the modern Turkish republic is the reasonable date for Turkey's eventual membership."