Crossrail is London's much-anticipated $20-billion tube line, due to open in December 2018 under the name of the Elizabeth Line. DW met Andrew Wolstenholme, the CEO of Europe's biggest infrastructure project. 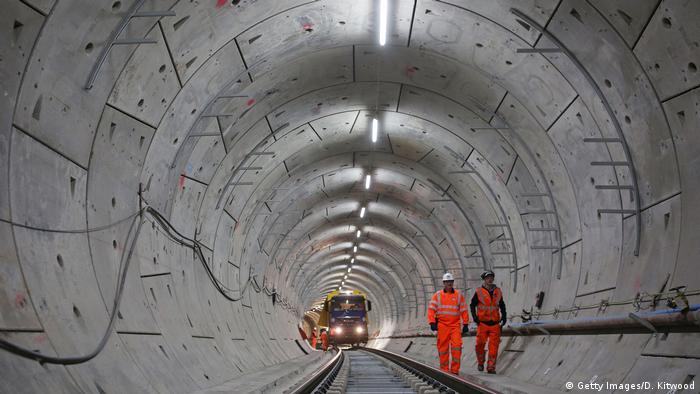 Just meters below the bustling streets of London, an army of engineers are constructing a brand new east-to-west subterranean railway. Construction of the 15-billion-pound ($19.8 billion) line has been underway since 2009 and is due to open within budget and on schedule in December 2018. Crossrail, as the project is known until it morphs into the Elizabeth Line, encompasses 42 kilometers (26 miles) of new tunnels, 10 new stations and is Britain's most ambitious infrastructure project since the Industrial Revolution. DW met Andrew Wolstenholme, Crossrail's CEO, to learn more about the construction of London's newest tube line.

DW: You've been a part of Crossrail for six years and now we're starting to see the new stations fly up. Of course, it's been a long process — almost a decade — so it must be an immensely proud moment for you to see this all coming together.

Andrew Wolstenholme: Yes, it is. I've been the chief executive on Crossrail since 2011 so it's been a six-year journey for me. If I look back at my career, I spent five years in the army, and worked around the world on projects such as Heathrow airport Terminal 5 and Heathrow Express. Big projects are something that I'm used to, but you have to describe Crossrail, which is the largest infrastructure programme in Europe, as more complex than any other that I've ever worked on. You used the word proud. I'm incredibly proud of the team that we built, of the capabilities that we developed over that time, and of the huge and impressive progress that we've made. The programme is now 90% complete. We're on schedule to open in December 2018, and we're inside our funding envelope. So this is a programme in very good health. It's going to be transformational for London. 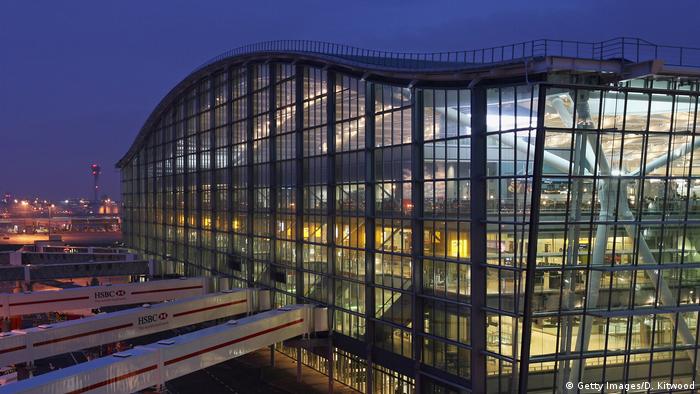 You mentioned that Heathrow Terminal 5 and Heathrow Express, but you've also worked on Hong Kong Airport. These are all huge projects, but still nothing as grand and complicated as Crossrail. What professional experiences would you say have prepared you for the challenges that you faced here?

Well, I think you grow, don't you, over the course of your career, and you acquire experience. For me, working on Hong Kong as a young professional engineer, I was working on the technical side. Learned a huge amount about tunneling in complex ground conditions. I guess when I worked on Terminal 5 in very constrained conditions, complex stakeholders, in and around an operating airport. When you collect together the experience that you've acquired over a whole lifetime, I think that I find here at Crossrail you need all of that, all of that experience. You have to understand the technologies and the engineering and how to manage huge, complex engineering companies through design and construction. You have to watch out for how you work with local communities and look after their interests. It's a very sensitive and multi-faceted project and this job requires me to be much more than an engineer.

Could you tell me a little bit about the biggest challenges you faced on the project, from a technical point of view? Was there a particular part of the project that really tested your ability and the ability of your engineers?

Well, Crossrail is 118 kilometers long. It starts in the west, at Reading — that's about 35 kilometres outside London — and goes underneath London at a location called Paddington, which is in the west of central London. It then comes up again at Stratford in the east and goes on to Shenfield. So it does two things. One is it acts as a high-capacity metro in the central section, and that's all underground. Secondly, it picks up the commuter areas to the east and to the west. That makes it a pretty unique train system, heavy rail going under central London. We, as you know, have a lot of London underground services, connecting London in many different ways. From a technical point of view, boring 42 kilometres of tunnels under London and building 10 new stations between Paddington towards our final station in the east called Abbey Wood. These are all hugely complicated, large scale engineering programmes.

Do you think London has set a new standard when it comes to metro systems with this line. Do the rest of the world now look to what London is achieving as the new gold standard?

Well, I would answer that question yes, but I can back it up with the fact that, over the last two years, representatives from 50 different capital cities and infrastructure organizations have come to visit London to understand how is it that 14.8 billion pounds has been raised towards one single programme. That's pretty unusual in terms of the enormity. How was it that we matched the solution for the need? How did we get the funding? How did we create the political alignment to be able to pass this in our parliamentary acts? People are very interested about how we did it, but they're also interested in the technologies that we use, the standards that we're creating, the mobility that we're providing through and across London. I do think you're right. I think this sets a new standard, a system that provides mass transit in the center of London, goes out to the commuter areas, one that has tremendous connectivity from end to end. One that is completely accessible to those people who have mobility impairments.

Does Crossrail prove that British engineering is still among the best in the world, and do you think that young, potential engineers will look at Crossrail and be inspired to join the industry?

I think the answer is yes. I've travelled in many different continents in my career, and I see British engineering sitting right at the forefront. We've always been good at architecture, at engineering. I think we've put people and the social issues at the heart of Crossrail, so we've attracted now more than 700 apprentices. These are young men and young women. I say young women because 30 percent of our apprentices are female, which we're very proud of. They come from all sorts of different backgrounds, giving people the opportunity, some from disadvantaged backgrounds, to have engineering as their first choice in the UK.

Crossrail will be delivered on time and within budget, as you've said. What is your secret?

Well, if you look at High Speed 1 [the Channel Tunnel], at Terminal 5, the Olympics, and then Crossrail, the UK has a very good reputation for being able to understand how to deliver huge programmes on time and on cost. I think it's crucial to start off with a very clear mission. This is more than a railway. We're going to help move London forward. You have to understand exactly what the specification is, so you set the objectives very tightly. You manage, with huge discipline, what you understand the outcomes to be in building Crossrail. Then, we have clearly defined accountabilities. We have the expertise to manage the various risks we have looking forward, and we create the environment where we get the best individuals and the best organizations to help deliver it. We've created the opportunity for people to really understand what it is that we expect of people it's an environment that people enjoy working in. It's one where we hold people to account. 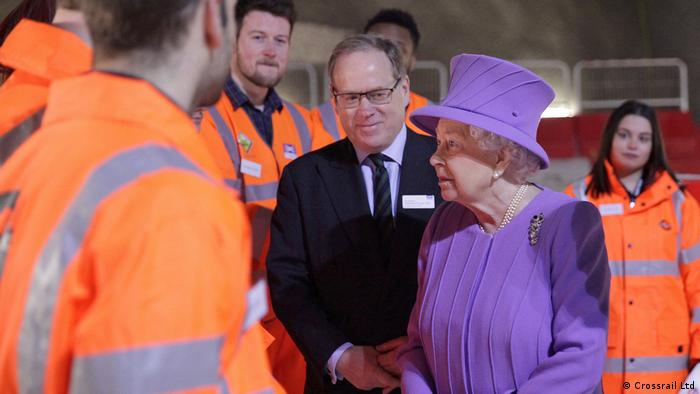 Not all governments are willing to spend billions on infrastructure projects like this. In your opinion, what benefits — obvious and not-so-obvious — do projects such as Crossrail provide to the whole of society?

Well, for Crossrail, you can see the imperative, the need. London today or London in 2020 with nine million people, in 2030 predicted to be 10 million people ... So London's growing. Capital cities and mayors and central governments have a responsibility to understand how it can safely grow. To do that, you need to be able to create capacity for growth to occur. For individuals, Crossrail gives people huge opportunities to travel with greater speed, with greater efficiency, in greater comfort. It reduces the time they spend crossing London getting to their workplace, so these are the obvious examples. I'm always keen to understand the societal outcome. Why should people pay for Crossrail through their taxes or through their shares? That's because we have demonstrably shown that it is creating outcomes that help and improve people's lives.

Finally, there's much talk about a north-to-south Crossrail 2, and HS2 [high speed rail linking the north of England to London]. Do you think that the UK is catching up with the likes of China and Japan when it comes to high-quality, fast, and reliable train services?

Well, I think we can be examples of much of what we do in the UK and can be very proud as to either it's certainly a standard or been equal to. Clearly, China is building hundreds of kilometers of high-speed rail, and they have a much bigger country to travel across. Clearly, if London does grow at the pace at which it's predicted, then Crossrail 2 is a very obvious follow-on programme for London. The rail system in UK is the fastest-growing and the safest anywhere in Europe and I think, sometimes, we need to remind ourselves of that fact. Crossrail has created 55,000 jobs and given 60 percent of the work to companies in London and the southeast of England – 62 percent of that has gone to small and medium-sized companies. From an environmental point of view, where did our six billion cubic meters of mud and soil go? We built a nature reserve in Wallasea, southern England. So when you can deliver these programmes that take the inherent risks and turn them into opportunities, the benefits of future projects are clear. And I think Crossrail has done a very good job of proving that.

Andrew Wolstenholme, OBE, is a British civil engineer and current chief executive of Crossrail. He is also the elected vice president of the British Insititute of Civil Engineers.

The interview was conducted by Michael Da Silva.