Tunisia′s disillusioned youth | World| Breaking news and perspectives from around the globe | DW | 21.01.2016

Right now, not many people are taking to the streets in Tunisia, but the protest movement is gaining momentum. Discontent has arisen from the economic depression but also, current political culture. 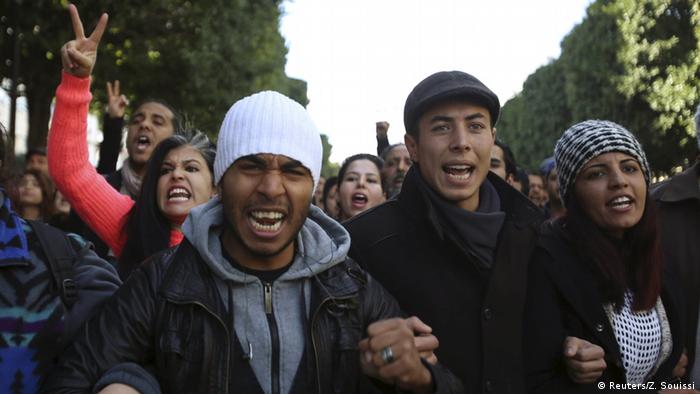 Was it an accident or suicide? The circumstances surrounding Ridha Yahyoui's death have still not been confirmed. The young man climbed atop a power pole near the governor's office in the town of Kasserine in eastern Tunisia. When he reached the top, he was electrocuted. Yahyaoui was protesting because his name was removed from a list of applicants for public sector jobs. On Tuesday, another young man did the same thing and ended up dying the same way.

Accident or suicide? The question matters, for suicide would be a highly symbolic political gesture: it is reminiscent of the suicide committed by Mohammed Bouazzizi, who set himself on fire in December 2010 to protest the arbitrariness of public administration. Back then, it was fire and now it's high voltage. A suicide would send the clear message that things have not changed much in the past five years in Tunisia, despite the suicides and all the people who have taken to the streets. The two deaths are also characterized by their geographical location: Kasserine is not too far from Sidi Bouzid, where Mohammed Bouazzizi ended his life. Today, five years on, the message is that the region is still suffering from the same problems.

'No vision, no plans'

In fact, many young Tunisians feel deprived of a future. The unemployment rate is high: on average it is 15 percent. In the economically undeveloped regions in the interior of Tunisia, it is almost twice as high.

Surprisingly, job protests have not yet begun. They are, however, foreseeable, says Abderrahman Hedhili, Chairman of the Tunisian Forum for Economic and Social Rights (FTDES), in a press interview. People are waiting for improvements, "but the government has no vision, no plans," he said.

That is not the only reason the government deserves to be criticized, says Moncef Slimi, a Maghreb expert at Deutsche Welle. "The government has responded to strikes with a certain arrogance. First, it declared a state of emergency in Kasserine and then acted as though it were a security issue." The problem was, in fact, much more serious. The demonstrators were addressing a greater problem. "Young Tunisians played a key role in the revolution five years ago. Nevertheless, they feel they are politically and economically marginalized even more today." 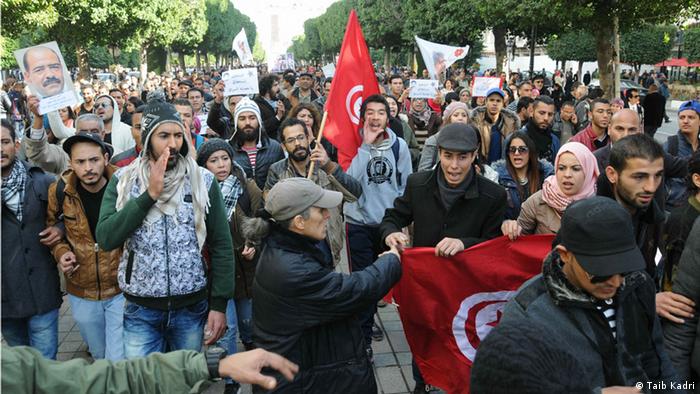 Crowds of demonstrators marched through the streets of the capital Tunis

This impression is even more dramatic, as it is not limited to Tunisia's interior regions. General protests, reveals the Tunisian newspaper "La Presse", have spread across the country. It describes sit-ins and peaceful protest marches in several Tunisian cities. The first protests, although very small ones, have been seen in the capital of Tunis.

Meanwhile, government spokesman Khaled Chouket has announced a series of social measures for the Kasserine region. The government has pledged to create around 5,000 new jobs and provide around 60 million euros for the construction of 1,000 subsidized apartments. Many Tunisians do not understand why this has taken so long.

"Politicians are mostly selfish," says Moncef Slimi. Many representatives of the people are primarily concerned about their own interests and are mired in personal rivalries and power struggles. The protests have mainly served as a wake-up call. Slimi says, "The state must prove that there is a political will now. Young Tunisians are waiting for a sign like that." 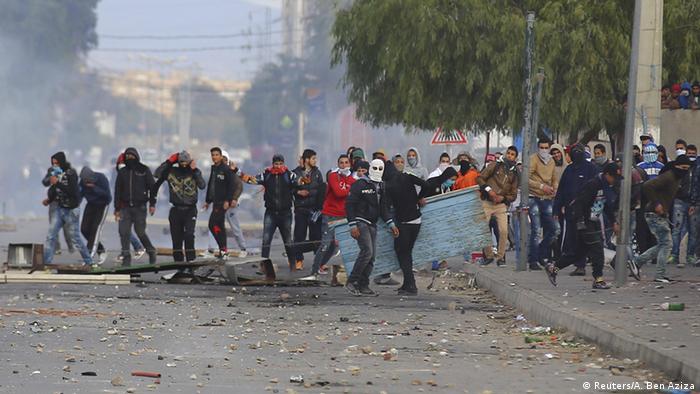 The risk of radicalization

A growing number of signs indicate that people will soon run out of patience. Wael Naouar, Secretary General of the Tunisian General Students Association, is already exerting pressure. According to him, Prime Minister Habib Essid only has two options, and explains, "Either he quickly finds a solution to the problem of unemployment, or he gives up power."

For the time being, the demonstrators' political slogans are moderate. They are committed to the rule of law and democracy. That may change, warns the newspaper "La Presse." Jihadists in the Tunisian backcountry may consider exploiting the protests for their own purposes. "The destitution and the remoteness of disconnected regions is their preferred terrain. Corruption and smuggling only aggravate the region's woes."

Jihadists could try to capitalize on the tensions by mingling with demonstrators and allowing them to escalate the situation. Then, the government may be tempted to take tough action, which in turn, would play into the hands of the jihadists.

Dream of an authoritarian state

Moncef Slimi agrees that the danger is real. The government has a right to be concerned about the protests and safety in public spaces; however, many people working in the state apparatus still dream that the regime toppled in 2011 will return. "And those people have consciously chosen the security option. They are interested in one thing: they want to curtail the power of democratic institutions as much as possible."

Violence erupts in Tunisia over unemployment

At least eight police officers have been injured in conflicts with protestors demanding economic reform in Kasserine. Two days of confrotation boiled over following the suicide of a young unemployed man. (21.01.2016)

Germany is debating measures to speed up the deportation of rejected asylum seekers from North Africa. Tunisia has agreed to support the government and asked for Germany to downgrade its travel warnings. (19.01.2016)

A year ago, Nidaa Tounes topped the polls, now Tunisia's strongest party is breaking apart. The government coalition still holds, but the balance of power has changed. (14.01.2016)