Nearly 95% of Tunisians voted to redraft the constitution in a way that critics say would damage democracy. Major parties boycotted the vote and the turnout was 30.5%, according to electoral officials. 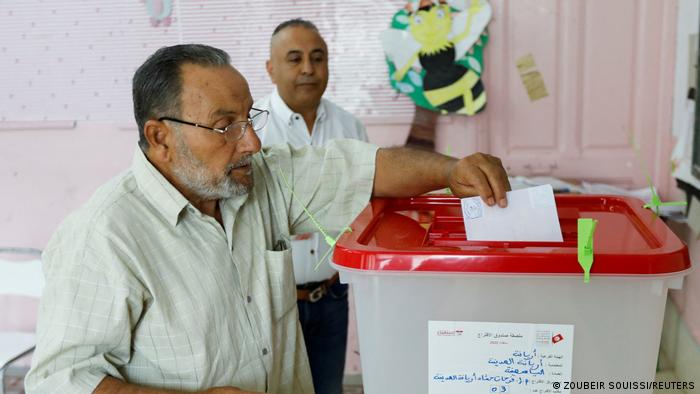 Saied's rivals accused the electoral board of "fraud" in response to a referendum marred by low voter turnout.

In the end, turnout hovered just above 30% with 94.6% of the vote in support of constitutional changes

What happened during the referendum vote?

After the vote Monday, Saied told a crowd of supporters that his first move after the referendum would be to draft a new electoral law. He claimed the existing voting system did not reflect the will of voters.

The president also promised "all those who have committed crimes against the country will be held accountable for their actions" but did not name names.

"Tunisia has entered a new phase," he said.

A blow to democracy claim critics

Critics feared the referendum could deal a major blow to democracy in the country that was the birthplace of the 2010-11 Arab Spring revolts.

The plebiscite comes exactly a year after a dramatic seizure of power that saw President Saied unseat the government and freeze the parliament as Tunisia battled a coronavirus surge amid political and economic crises.

Monday's ballot was seen as a vote on Saied's popularity.

Nearly 9.3 million out of Tunisia's 12 million population  — of civilians aged above 18 — have opted in or been automatically registered to vote.

The figures include about 356,000 voters registered overseas, for whom polling began on Saturday.

Opposition parties and civil society groups have called for a boycott of the referendum and accused Saied of attempting to turn Tunisia into an autocracy — a decade after the country became the sole success story in pro-democracy uprisings across the region.

Why is the draft constitution controversial?

Saied had been working on the new constitution for several months. A draft was published in the country's official gazette earlier in July.

The proposed constitution hands the president the authority to name and sack the government without the approval of the parliament as well as appointing judges, among other powers.

With the new text, the president could present draft laws to parliament, which would be obliged to give them priority.

The charter would also place the head of state in supreme command of the army.

Saied's draft would also make it nearly impossible to remove him from office before the end of his five-year tenure in 2024.

If approved by the majority of cast votes, the draft constitution would replace a 2014 version that curtailed the president's powers in favor of parliament and the prime minister.

The country's 2014 charter was a hard-won compromise between Islamist-leaning and secular forces, agreed on after three years of political upheaval.

In Germany, Green Party parliamentarian and North Africa observer Tobias Bacherle told DW that the "problem is that there is a constitutional referendum taking place at all — considering Tunisia's current state."

"There is absolutely no legal justification for Kais Saied's unilateral maneuvering," underscored Bacherle.

"The constitutional referendum is clearly illegitimate. After dissolving parliament, Saied is now undertaking an undemocratic effort to rewrite the constitution according to his own will — and in doing so he is also ignoring the advice of the drafters' commission he himself appointed," he added.