Tunisia struggles to find way out of crisis | World| Breaking news and perspectives from around the globe | DW | 21.02.2013

Tunisia struggles to find way out of crisis

Tunisia needs to tackle the ongoing economic and political crises. Many expect the Islamist Ennahda party to again dominate the country's political future. 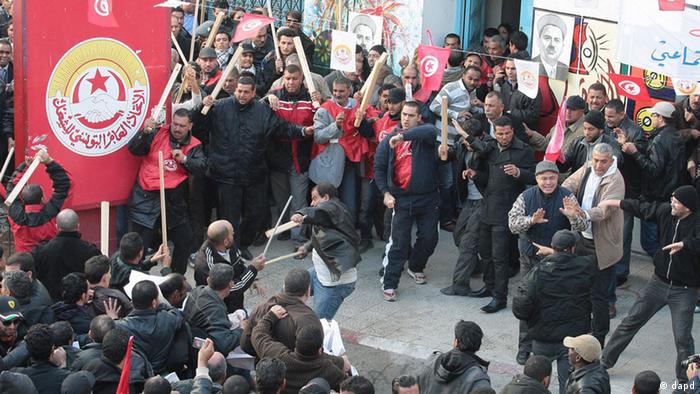 The political crisis in Tunisia is getting worse. After the resignation of Prime Minister Hamadi Jebali, the country does not have a functioning government. Political parties are locked in argument while many Tunisians suffer from the poor economic situation and the high level of unemployment.

Tensions between religious and secular forces in the North African country have also increased in past months. German Foreign Minister Guido Westerwelle called on all political sides to return to dialogue and expressed his concern about the situation in the country that was the birthplace of the Arab Spring uprisings.

Jebali announced his resignation on Tuesday evening (19.02.2013) after his own Ennahda party had rejected his plan to form a technocrat government. Jebali had hoped that a cabinet of experts not affiliated with any of the political parties would be able to lead the country out of the crisis. 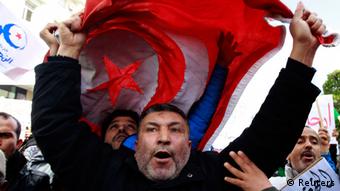 The technocrats were supposed to govern in place of the three party collation of Islamist Ennahda, social democratic Ettakatol and the secular Congress for the Republic (CPR) as well as prepare new elections. For Ennahda, however, it was out of the question to accept the plan as it was an idea first fielded by the opposition.

"It would have been admitting to failure or at least a crisis," said Hardy Ostry, head of the Tunisia office of Konrad Adenauer Foundation, which is aligned with Germany Christian Democratic Union. Also, the party, the strongest in Tunisia, would then lose its control over central ministries including the Interior, Foreign and Defense ministries, Ostry told DW.

No climate for investments

Jebali's resignation casts a shadow over the ongoing negotiations between Tunisia and the International Monetary Fund (IMF) in Washington. For two years since the fall of dictator Zine El Abidine Ben Ali, the country still suffers from a serious economic crisis and is in dire need of fresh credit.

Rating agency Standard and Poor's has recently downgraded the country yet again. According to Ostry, tourism also suffers from the crisis, "The entire situation is certainly not very positive for the economy."

The situation is made worse by the murder of opposition politician Chokri Belaid, earlier in February. Belaid was a sharp critic of the governing Islamists. That's why the opposition believes Ennahda itself was behind the attack. For days, demonstrators protested in the streets and clashed with police.

Tunisian political scientist Chokri Hamrouni of the Tunisian Institute for Strategic Studies said in addition to the political, economic and social crisis, there also is a serious security issue in Tunisia.

"As a consequence of the killing of Chokri Belaid, many Tunisians are asking themselves in what kind of a security situation they live in," he said, adding that many opposition activists, intellectuals and artists say they experience threats and intimidations on a daily basis. 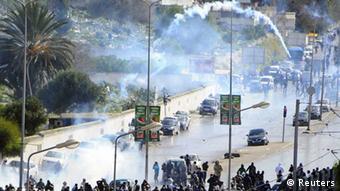 According to Tunisian media, President Moncef Marzouki wanted to meet with Ennahda leader Rachid Ghannouchi to discuss the situation. Political scientist Hamrouni said outgoing Jebali is likely to once again get the job as prime minister and the task of forming a new cabinet.

Despite his Ennahda membership, Jebali is accepted by the large majority of the country's political class. In the dispute between whether to go with technocrats or party politicians, there might be a middle path after all. This would be about a broadening of the past coalition to include more politicians and a number of independent experts as well, Hamrouni said.

Ostry though did not expect Jebali to be at the helm of the new cabinet. While the now former prime minister signaled he'd be willing to take the job, he also issued some conditions.

His demand that all powers could lie with the government could make it particularly difficult for him to return to power. That demand is, according to Ostry, directed against the controversial League to Protect the Revolution, which is seen as very close to Ennahda. Independent of this, Ennahda would aim for a broadening of its current three-party coalition.

But this alone would not solve the crisis, said Ostry.

"The actual problem is that as soon as possible a new constitution needs to be passed and that there's a date for the next election," he said, adding such a move could restore trust and security and bring investors back into the country. "I believe that the calls for a clear political path are crucial."

Feted by the western media for penning the unofficial anthem of the Arab Spring, rap star El General believes the changes must go further. He is one of a number of young Tunisian "revolutionaries" calling for sharia law. (13.02.2013)

Tunisia remains in turmoil, with people taking to the streets in anger about the murder of an opposition leader. Critics blame the government for having failed to stop the extremists believed to be behind the attack. (09.02.2013)

The cold-blooded murder of opposition politician Chokri Belaid has divided Tunisian society further. But if democratization is ever to be achieved, ideological warfare needs to come to an end, says DW's Loay Mudhoon. (09.02.2013)