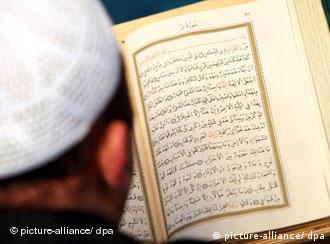 Most imams in Germany were born and educated in Turkey

The state government of Baden-Wuerttemburg on Tuesday announced plans to create Germany's first university department of Islamic studies at the University of Tuebingen by next year.

State premier Stefan Mappus and Minister for Science, Research and Art Peter Frankenberg presented the plan in the southwestern city of Stuttgart, saying it would provide Islam with a legitimized and recognized place in Germany's system of higher education.

The state's education ministry plans to staff six full-time professors in the department who have preferably completed at least part of their academic careers in Germany. Starting in the winter semester of 2011-2012, it plans on training up to 320 imams to work at mosques, in education and social work.

The Islamic studies department would be the first of its kind in Germany, where most imams were born and educated in Turkey, speak little German and are unfamiliar with western European culture. Most of those trained in Germany attend the University of Muenster, which has a Department of Arabic and Islamic Studies.

Experts expect a new generation of imams educated in Germany would improve the integration of the country's four million Muslims.

The University of Tuebingen is currently applying for federal funding for the program, state officials said. Universities in Muenster, Osnabrueck and Frankfurt are also discussing similar programs.

Germany will announce a plan on Monday to offer training programs for students who wish to become Muslim spiritual leaders, or imams, the country's top academic body said. (30.01.2010)