Rarely has an issue caused such outrage: Protesters have turned out across Germany to demonstrate against the TTIP and CETA trade deals with the US and Canada. They say they won't stop until both are scrapped. 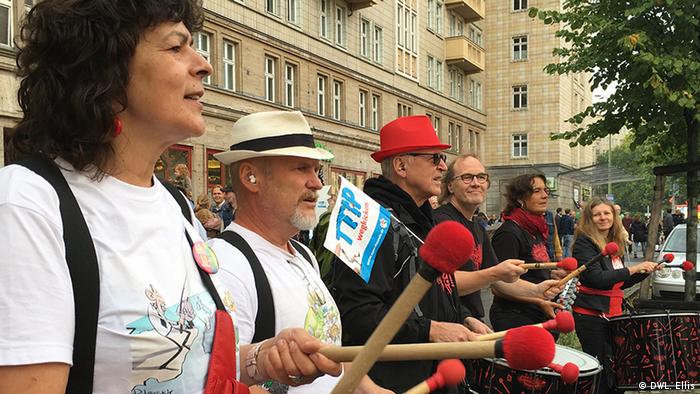 German retiree Maud Kellerhals has never been to a demonstration in her life. But on Saturday, the 79-year-old former school secretary from Berlin decided to make an exception. She marched through the city, together with many thousands of other people.

"I have nothing against the Americans, but I don't think they should be able to tell us what to do," she said, explaining her decision to join the mass protest against Europe's controversial trade deals with the US and Canada, TTIP and CETA.

"I don't want to eat their genetically modified food. And the idea that big US companies can take our government to court is just dreadful." Kellerhals said she had been reading up on the issues on the internet. 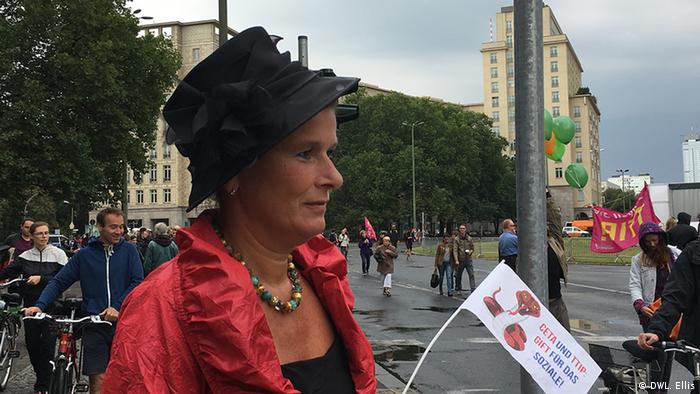 "CETA and TTIP - poison for societal welfare," reads this banner

Opposition to the two trade deals has been growing steadily in Germany. A poll conducted in May 2016 by the public broadcaster ARD showed that 70 percent of Germans thought TTIP - the proposed deal between Europe and the US - would bring "more disadvantages" than advantages. That figure was up from 55 percent in June of the previous year.

The Berlin demonstration testified to the strength and breadth of the opposition. The 29-year-old ecology student Stefan Meurer from Potsdam said he rarely went to demonstrations. However, he was so outraged at the prospect of TTIP and CETA being approved and coming into force in Germany that he had decided to attend the Berlin rally.

"I am not against free trade," he said. "But in this form it would undermine our democracy and our standards."

As with many of the protesters on Saturday, one of his fears was that standards for food and other products such as medicines would be dropped if TTIP became law.

"In Europe we have to prove that a product is safe before it can be released on to the market," he said. "In the US they can sell something until someone says it is harmful." 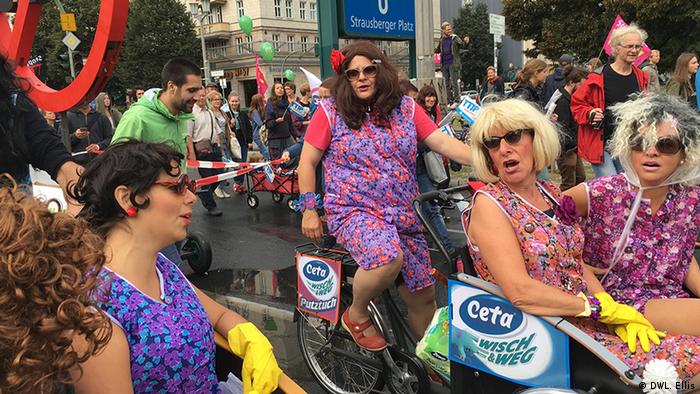 These "cleaners" want to cleanse the world of CETA

'We elect politicians, not companies'

Meurer was also worried the market would be "flooded with cheap, substandard goods which don't conform to our rules."

For 51-year-old sales assistant Anna Berger, this was also a key issue.

"I feel this is a threat to our way of life," she said. "We will be swamped with cheap products from around the world. We will not be able to compete. Our own farmers and small-business owners will go bankrupt. And the truth is I don't need cheap apples from South Africa. I would rather have apples from this area."

The majority of demonstrators DW spoke to were similarly alarmed by the idea of bad food suddenly appearing on the shelves of German supermarkets - even though it is unclear if this would really happen. Another oft-cited concern was the provision in TTIP allowing foreign companies to sue governments if their profits are threatened.

"You cannot transfer power to unelected companies like this," said 51-year-old Ralf Grossmann, who described himself only as an employee. "We elect politicians. Not companies." 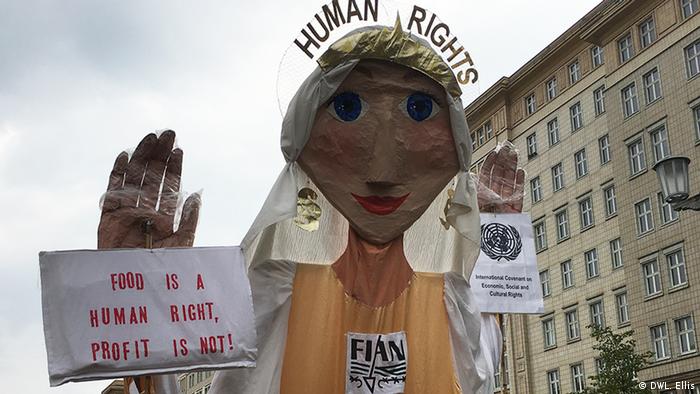 Many protesters are worried that profit-making drives governments' policies

Some demonstrators, such as 67-year-old Angela Schulze, admitted to being unsure of the details contained within TTIP and CETA and what they would entail for their day-to-day lives.

"If I am honest, I don't know what it all really means," said Schulze. "But that is the problem. It has not been explained to us. It has all been negotiated in secret, behind closed doors. That is not right."

Despite such worries, the atmosphere at the march in Berlin was decidedly festive. There were booming techno floats, followed by dancing teenagers with multi-colored mohawks, as well as drumming bands and transvestite choirs - all melded together with a common sense of purpose. 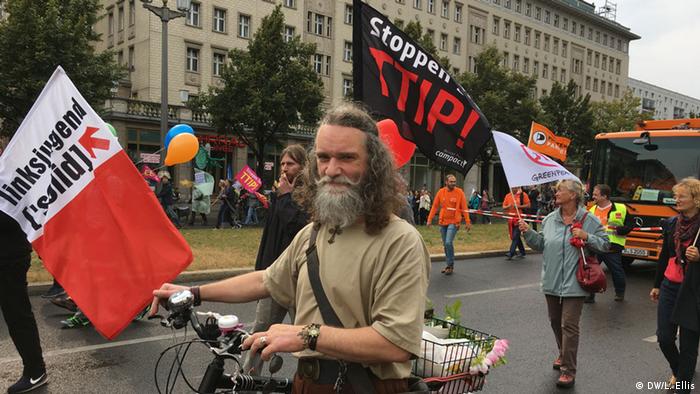 Grossmann: "People have had enough"

The demonstrators were strikingly diverse in appearance and background, with the likes of employee Ralf Grossman with his big bushy beard and woman's skirt walking alongside shop assistant Anna Berger and the odd besuited middle-aged man.

"You can see it is not just the usual suspects - the eco-freaks and left-wing punks - who care about this issue," said Berger. "It's ordinary people like me, too."

Grossman, for his part, said he felt that the anger went beyond TTIP and CETA. "Obviously, people are galvanized by these trade issues, that is why we are here today. But there is also a feeling that everyone is being worked into the ground and exploited. It is something really basic. People have had enough."

Negotiations for the free trade agreement between the EU and Canada are entering the final stage. The political stakes are high for Germany's economics minister, who is in Montreal trying to remove the final obstacles. (15.09.2016)

Chancellor Merkel said the EU should continue negotiations with the United States on the Transatlantic Trade and Investment Partnership (TTIP). But doubts about the trade deal and resisitance against it are growing. (09.09.2016)

German activists have launched the country's largest-ever civil lawsuit in protest of a planned free trade agreement between the EU and Canada. They argue the trade pact violates the constitution and the rule of law. (31.08.2016)

German economics minister Sigmar Gabriel's comment that the TTIP agreement between the U.S. and the EU is 'de facto dead' was a cheap move to save his own skin, writes Henrik Böhme, DW's economics editor. (30.08.2016)

US trade expert: TTIP is on hold, not dead

Contrary to German Vice Chancellor Gabriel’s assertion, transatlantic trade deal talks have not failed, a US trade expert tells DW. Instead, she notes, negotiations have hit a temporary impasse for two reasons. (30.08.2016)

Nursing staff in Berlin's hospitals, whose services have proved so vital in the pandemic, are protesting for better working conditions. They complain of understaffing, insufficient pay and other systemic problems.