Trump's ambassador to the Netherlands apologizes for false 'no-go' claims

The US ambassador to the Netherlands, Peter Hoekstra, initially tried to sidestep questions about his inflammatory and false statements regarding immigrants. But as pressure mounted, he eventually relented. 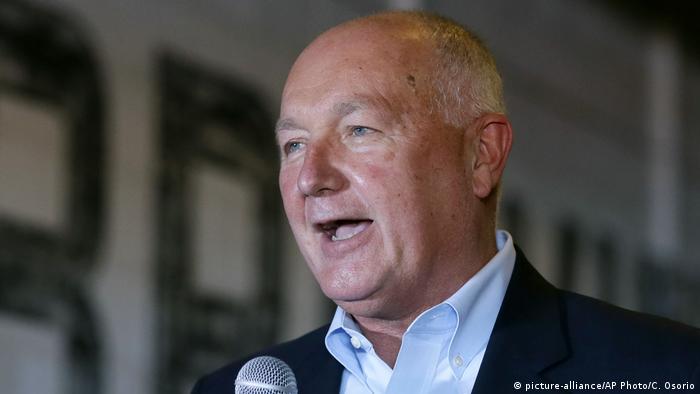 The new US ambassador to the Netherlands has belatedly apologized for false and disparaging comments he made in 2015 regarding immigrants in the country where he will be representing US interests.

Ambassador Peter Hoekstra said he regretted the claim in which he wrongly said Muslims had brought such levels of violence to the Netherlands that some parts of the country had become "no-go zones."

The Dutch-born former Republican congressman said, "I mixed up countries," though he did not say what other country he might have been thinking of.

Speaking at an event sponsored by the far-right conservative David Horowitz and his Freedom Center in November 2015, Hoekstra went on a rant against Europe and its immigration policies.

"The Islamic movement is now gotten to a point where they have put Europe into chaos," Hoekstra had said at the event, which was recorded.

He added: "There are politicians that are being burned."

Reflecting on his remarks in a Dutch newspaper, Hoekstra told the conservative daily De Telegraaf: "That one shocked me personally ... While you know there have been other issues in other countries in Europe, you know that has never been the circumstances here. That was a wrong statement. That was just wrong."

His false accusations were not forgotten by the Dutch and he was peppered with questions about his remarks during his first press conference with the Dutch media on Wednesday.

Hoekstra initially tried to sidestep questions about his incendiary comments, but was quickly informed by one journalist, "This is the Netherlands, you have to answer questions."

After stewing in the controversy for a couple of days, Hoekstra relented, at the urging of the US State Department.

Undersecretary of State Steve Goldstein said during a press conference in Washington on Thursday that the State Department "does not agree" with Hoekstra's remarks about Muslim migrants in the Netherlands.

"The ambassador made mistakes in 2015, made comments that should not have been made. He recognizes that," Goldstein said. "We have made clear to the ambassador that he must move to get this behind him."

Hoekstra exacerbated his dilemma in December when he denied making the 2015 remarks, telling the Dutch television program Nieuwsuur it was "an incorrect statement ... fake news."

Later in the same TV interview, he denied calling it fake news.

Hoekstra was born in the Netherlands but immigrated to the United States when he was a child. He was sworn in as ambassador to Holland on December 11.