Troops Loyal to Yushchenko Attempt to Enter Kiev as Talks Stall | Europe| News and current affairs from around the continent | DW | 26.05.2007

Troops loyal to Ukraine's President Viktor Yushchenko tried to enter the capital Kiev Saturday, the interior ministry said, as crisis talks between the feuding president and prime minister were delayed. 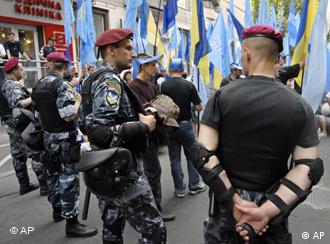 The talks between Yushchenko and Prime Minister Viktor Yanukovych on their increasingly bitter power struggle were to follow three hours of negotiations late Friday that ended with no sign of progress.

However, the negotiations Saturday had still not begun two hours after the scheduled start time, a spokeswoman for the presidency told reporters. 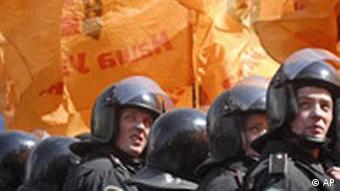 Troops loyal to the president stopped outside Kiev

The deputy head of the ministry, Mykhaylo Kornyvenko, told journalists that 82 vehicles carrying 2,050 soldiers were headed toward Kiev, but that "practically all of them have been stopped in different places." Ukrainian television showed footage of blue interior ministry buses driving in a long column, the day after Yuschenko issued a decree assuming control of the ministry's forces.

According to the interior ministry, the troops were deployed by the commander of the ministry's military branch, Olexander Kikhtenko, who backs Yushchenko and no longer recognizes the authority of pro-Yanukovych Interior Minister Vassyl Tsushko. The commander "acts according to his own logic and his own view," Tsushko was quoted as saying by Interfax news agency.

Tsushko appealed for calm, asking "politicians to be more restrained."

"It's necessary to calm down. There won't be any use of force. We won't storm anything," he said.

Russia, the European Union and the United States have expressed concern over the situation in Ukraine, which is sandwiched between Russia and several EU states including Poland. 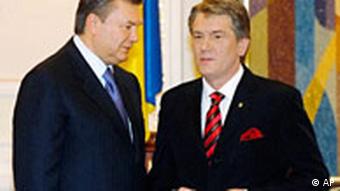 Which Viktor will be victorious?

Fears of violence are growing as the feud between Yushchenko and Yanukovych drags on, with both sides competing for loyalty of the security forces.

Tens of thousands of troops serve in the interior ministry's military branch. The ministry also comprises police and paramilitary units and in general has sided with Yanukovych.

A senior security advisor to Yushchenko warned Saturday that Yanukovych's camp could mount "provocations" aimed at "destabilizing the situation in the capital."

On Thursday an elite paramilitary unit from the interior ministry intervened to protect the country's pro-Yanukovych prosecutor general after Yushchenko ordered his dismissal. The elite forces arrived at the Kiev offices where the prosecutor general was holed up and forced out the president's security personnel. 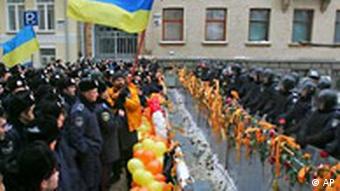 Loyalties have once again split the people of Ukraine

Control over interior ministry forces was also crucial in the Orange Revolution of 2004, when mass street protests helped bring Western-leaning Yushchenko to the presidency, overturning a flawed vote initially granted to Yanukovych.

Ukrainian President Viktor Yushchenko launched a political showdown Friday when he ordered troops to secure government buildings. A German diplomat warned the move could harm the Ukraine's relationship with Europe. (25.05.2007)

German Chancellor Angela Merkel dampened Ukraine's hopes of European Union membership during talks with the Ukrainian prime minister in Berlin. But she did offer to back a trade agreement. (28.02.2007)

At an EU-Ukraine summit Friday, EU officials will discuss trade, visas and energy. But the subtext of the meetings is the future of EU-Ukrainian relations after a pro-Russian prime minister took over in September. (27.10.2006)