Romania's premier Victor Ponta is facing trial after being indicted on corruption charges. The opposition Liberal Party has filed a motion of no-confidence against Ponta's government. 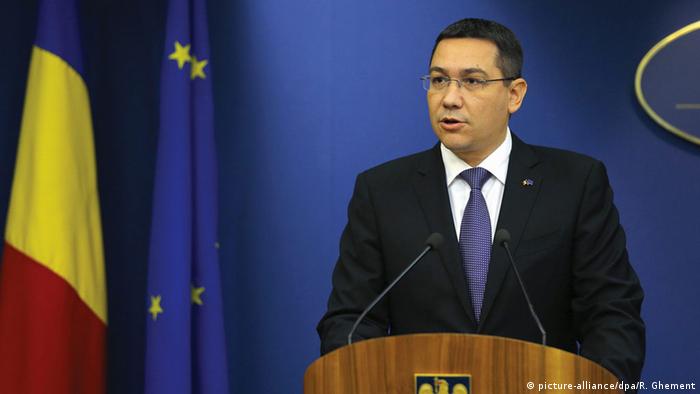 The trial started on Monday for Romania's prime minister who has been indicted on corruption charges. Victor Ponta was not required to attend the session and did not appear in court.

He refused to resign and denied any wrongdoing. "It is important that we have stability", the 43-year-old politician told reporters on Monday explaining why he did not want to step down. "We must continue the government."

The ruling Social Democratic Party met on Monday to discuss the latest developments. Chairman Liviu Dragnea said that his party would continue to support its premier Ponta, who took office in May 2012.

'Choose between Romania and Ponta'

The opposition Liberal Party announced that it has filed a motion of no-confidence against Ponta's government later on Monday. According to Romanian news agency Mediafax, the title of this motion is "Choose between Romania and Ponta, a compromised premier. Impeach Victor Ponta!"

Mediafax quoted the motion as stating that "a prime minister who is on trial compromises a whole nation. In any other EU country, the prime minister would have resigned the very moment when he was first indicted."

The confidence vote will take place in parliament on September 29, while the next scheduled court day in Ponta's case is on October 23.

Prosecutors first named Ponta a suspect in June and he was indicted in July on charges including money laundering, conflict of interest, being an accessory to tax evasion and making false statements.

Romanian Prime Minister Victor Ponta has been charged with fraud, tax evasion and money laundering. And calls for his resignation are becoming louder, even among his erstwhile supporters. (14.07.2015)