International search teams have stepped up their hunt in the remote southern Indian Ocean near Australia for a missing Malaysian Airlines flight. Chinese satellites have reportedly captured new images of debris.

Chinese satellites have reportedly picked up new images of debris in the southern Indian Ocean, Malaysia’s transport minister said during a press conference on Saturday. The debris was 22-by-30 meters in size.

Hishammuddin Hussein (pictured above) told reporters that Cyclone Gillian was making for difficult search conditions, with teams experiencing strong currents and rough seas. He went on to say that there have been no sightings of debris in the northern search corridor, which stretches from Thailand to the Kazakhstan-Turkmenistan border.

The transcript of MH370’s last contact with Malaysian air traffic control "did not indicate anything abnormal," Hussein said. He added that all the cargo listed in the plane’s manifest was in compliance with international regulations.

For the past three days, planes have been searching for two large objects spotted in the Indian Ocean. Six planes took off on Saturday from Australia to search a desolate section of the Indian Ocean for the possible debris of flight MH370.

Australia's acting prime minister, Warren Truss, told reporters in Perth Saturday that "so far, there have been no findings of note."

"It is a remote area, but we intend to continue the search until we're absolutely satisfied that further searching would be futile - and that day is not in sight," he said.

Two Chinese military planes arrived in Perth to help search the remote stretch of ocean on Saturday. Australian, New Zealand and US planes were already involved in the search, with two Japanese planes expected to arrive Sunday.

The Australian Maritime Safety Authority (AMSA) is coordinating the massive southern hunt for the plane, which vanished on March 8 with 239 people on board while traveling from Kuala Lumpur to Beijing.

Because of the great distance planes must travel to reach the area, the Orions only have enough fuel to search for two hours. The commercial jets can stay in the air for five hours before returning back to base.

More planes from Japan and China are also expected to join the international search in the coming days. China, which was home to 153 of the plane's passengers, said at least seven of its ships were headed to the area, though it could be days before they arrive.

Two merchant ships are already in the area, and the navy supply ship HMAS Success is due to arrive late Saturday.

Friday's search effort relied mostly on trained spotters aboard the planes rather than radars, which found no signs of the plane on Thursday. In general, the hunt will rely mostly on visual sightings because of the reliance on civilian aircraft, though military planes will continue to also use radar. 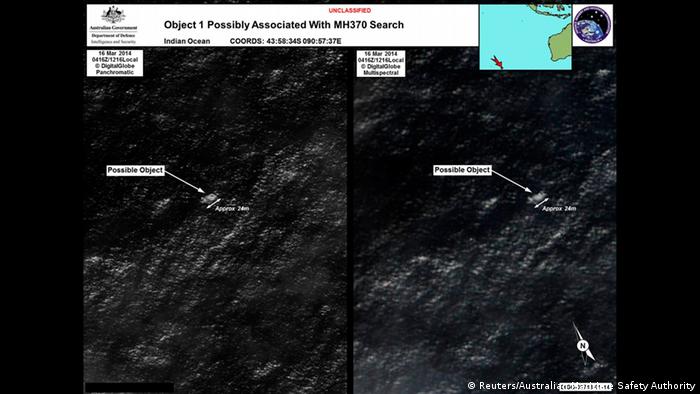 Debris spotted earlier by Australian authorities. The largest object was 24 meters in length.

While the main focus on the search has shifted to the southern Indian Ocean, aircraft and ships are continuing to search the Andaman Sea between Thailand and India.

The plane's "black box" cockpit data recorder only transmits an electronic signal for 30 days before its battery dies, meaning it will be significantly harder to locate if the search extends another two weeks.

On Friday, Malaysian authorities asked the United States for undersea surveillance equipment to help locate the plane, with Defense Secretary Chuck Hagel promising to evaluate their availability and usefulness, the Pentagon said. The US has already spent $2.5 million (181. 2 million euros) operating ships and aircraft in the search, and has budgeted $1.5 million for further efforts.

Australian officials have spotted two objects via satellite in the southern Indian Ocean, possibly related to the search for missing flight MH370. Several aircraft are en route to the area where the objects were sighted. (20.03.2014)