Tough times ahead for German automakers | Business | Economy and finance news from a German perspective | DW | 25.08.2011

Tough times ahead for German automakers

German carmakers have been working full throttle since the start of 2011. The first half of the year saw manufacturers fill their order books and achieve record turnovers, but experts warn the party will soon be over. 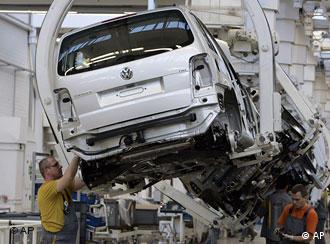 German auto workers could be given fewer shifts next year

For the first six months of this year, Germany's auto manufacturers had to adapt to the happy situation of being in extreme demand. Overtime became standard for industry workers, as did waiting lists for new car buyers.

But everyone knows that good things don't last forever, and if a new report is anything to go by, this particular airbag of prosperity may be ready to burst soon.

The study, conducted by the Center Automotive Research (CAR) at the University of Duisburg-Essen, cites a number of economic risk factors facing German carmakers, including the US and European debt crises, possible oil price fluctuations linked to political unrest in North Africa, and the nuclear catastrophe in Japan.

CAR head Ferdinand Dudenhöffer told Deutsche Welle that the cumulative effects of such risks, as well as he calls Germany's "overly hasty withdrawal" from nuclear energy, led to his prediction of "a significant fall in growth." 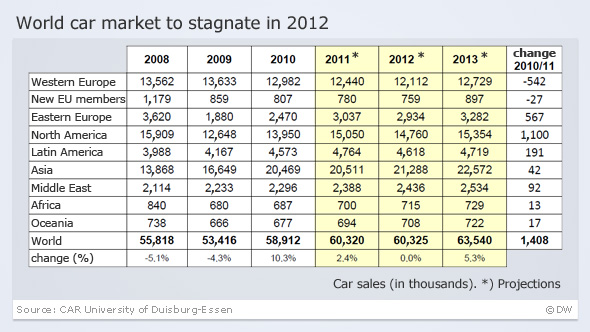 Meanwhile, a separate study conducted by the Center of Automotive Management (CAM) in Bergisch Gladbach found Volkswagen was the strongest performing carmaker in the world, followed by Daimler, Hyundai-Kia and BMW.

While Dudenhöffer agrees that 2011 will prove to be a excellent year for the auto industry as a whole, he says German car companies will see sales stagnate in 2012 as demand from emerging markets in Asia slows down. 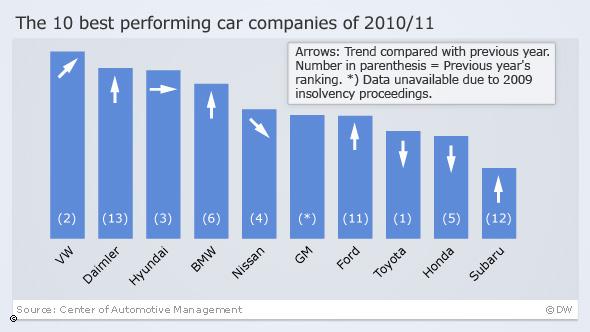 Sales down in Asia

Although Dudenhöffer anticipates a continuation of the "growth process" in China and India, he says it will become far less pronounced.

He predicts modest gains of 5 percent in the Chinese market, rather than the 20 or 30 percent that have become customary over recent years. And that will have a massive knock-on effect back home in Germany.

"The gains that will be made in China and India won't be able to compensate for the slight losses in other markets," he said, adding that carmakers should not to put too much emphasis on growth or start hiring lots of new staff who could pose a problem when the going gets tough.

The European Commission is to examine aid paid out by the German government to car manufacturers BMW and Volkswagen. The money has been pledged to promote projects in eastern Germany. (13.07.2011)

Sales of German cars in the US have been static for years. German manufacturers have watched as their customers are snatched by the Japanese and Americans. Now the German car companies are fighting back. (25.06.2011)