Toronto police have identified the suspected driver of a van that ran into pedestrians in the Canadian city, killing at least 10 people. Several others are in critical condition. Officials are searching for a motive.

Toronto police confirmed that 10 people were killed and 15 injured when a white van mounted a curb in the north of the city on Monday. Sunnybrook Hospital reported that several victims were in critical condition.

The driver fled the scene, but police managed to track down the vehicle and arrest the suspect. 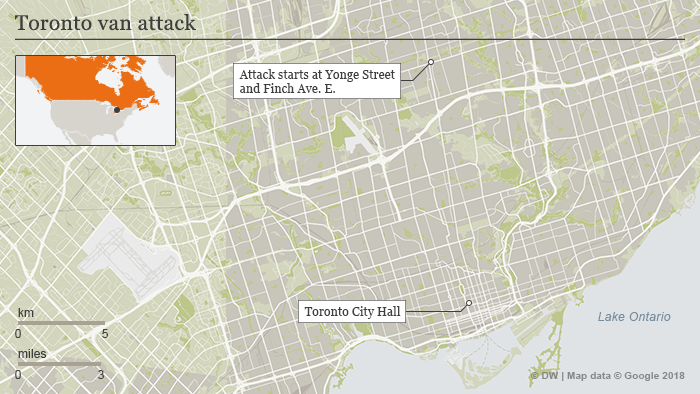 A witness, Nick Sanka, told the broadcaster Global News: "One person was hit at the corner of Yonge and Finch, two at the next corner and three at the corner next to me were run over. ... He was definitely speeding, wasn't swerving, just went straight through."

"I can't believe this is happening"

Another witness, Alex Shaker, told CTV News Channel: "He started going down on the sidewalk and crumbling down people one by one."

The Toronto Star newspaper published a video on its website that showed police apparently arresting a man after the incident. "Shoot me in the head," the man, believed to be the suspect, says while confronting police officers.

The truck rental company Ryder System Inc. confirmed that its vehicle was used in the incident.

"We should all feel safe walking in our cities and communities," Trudeau said. "We are monitoring this situation closely, and will continue working with our law enforcement partners around the country to ensure the safety and security of all Canadians."

Kathleen Wynne, the premier of Ontario, said provincial, federal and Toronto city police were working together to investigate what happened. Speaking to reporters at about 3:30 p.m. local time, Wynne said no motive had been determined. "I think we are all unsettled and disturbed by a situation like this," she said. "I think it's impossible not to be. It's frightening."

'Our hearts go out to anyone affected'

Critical timing: The incident occurred as ministers from G7 countries were meeting in Toronto in the run-up to the G7 meeting in Quebec City in June.

The man behind the van attack in Münster reportedly left behind a letter detailing difficulties with his parents and a desire to take his own life. Several victims remain in critical condition. (09.04.2018)

Canadian Prime Minister Justin Trudeau has condemned the non-fatal stabbing of a policeman in Edmonton on Saturday as a "terrorist attack." Police said they found a flag of the "Islamic State" at the scene. (01.10.2017)