Canadian Prime Minister Justin Trudeau has condemned the non-fatal stabbing of a policeman in Edmonton on Saturday as a "terrorist attack." Police said they found a flag of the "Islamic State" at the scene. 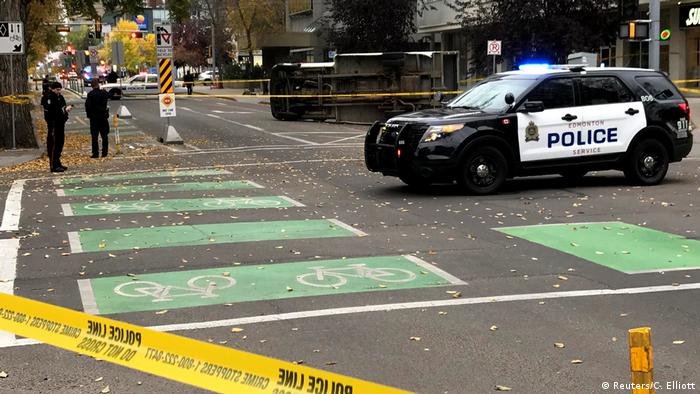 Police have detained a suspect accused of ramming his vehicle into a police officer before stabbing him and fleeing on foot. The same suspect is believed to have later crashed a separate vehicle into pedestrians before ultimately being apprehended.

None of the victims were killed in the attack in Canada's western Alberta province, but the police officer and four of the pedestrians were hurt.

Canadian police have said the suspect is a Somali national who had been seeking refugee status.

"While the investigation continues, early reports indicate that this is another example of the hate that we must remain ever vigilant against," Prime Minister Justin Trudeau said in a statement on Sunday.

According to broadcasters CBC and CTV, a flag belonging to the "Islamic State" was found inside the vehicle that hit the police officer.

Edmonton Police Chief Rod Knecht said the suspect is likely to have acted alone, but they have not ruled out the possibility that others were involved.

Edmonton Mayor Don Iveson said the authorities believed there was no further threat and that it had been a "lone wolf" attack.

Amid Washington's shifting role on the global stage, leaders in Ottawa are urging Canada to take a new foreign policy direction. Are the country's traditionally strong ties with the US being called into question? (09.06.2017)

The Ottawa shooting has not just shocked Canada, but could even change the multiethnic country. The questions now facing Canadians have to be answered by Europeans as well. (24.10.2014)

Canada has announced a new bill that would make it a crime to call for a terrorist attack and give new powers to the government's spy agency. The legislation comes in direct response to last year's attacks in Ottawa. (31.01.2015)