Top athlete escaped the GDR using his aquatic talents | Germany | News and in-depth reporting from Berlin and beyond | DW | 05.11.2009

Not everyone in the former East Germany waited until the Wall came down to go west. Axel Mitbauer, a member of the GDR national swim team, was the only top athlete to actually use his sport to flee East Germany. 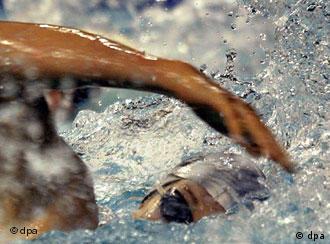 The cold water was the biggest challenge in escaping

Axel Mitbauer's escape from the German Democratic Republic 20 years before the fall of the Wall was one of the most spectacular ways people chose to flee then East Germany.

As a member of the GDR national swim team and a master in the 400-meter freestyle, he used his athletic talent to cut through the Iron Curtain. On the night of August 17, 1969, the then 19-year-old Mitbauer swam from the Boltenhagen resort area on the Baltic Sea to Luebeck's bay area.

"Water is my element," Mitbauer said, reminiscing about his career. "It's been my companion, as it were, for the past 51 years, and I still love it."

Petroleum jelly to keep out the cold 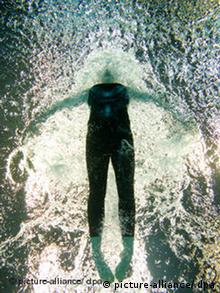 Around 600 athletes escaped the GDR

But 40 years ago, crossing the border presented a challenge. The Baltic Sea was an area many used in their attempts to flee East Germany, and guards were always on the alert as a result. Mitbauer studied the guards' habits for a week and learned that they turned off the search lights shortly once an hour to allow them to cool. On August 17, around 9 p.m., he grabbed his chance and dove into the water. As the lights were turned back on, he went under water again and swam 25 kilometers (15.5 miles).

"I had one minute to cross both the first and second sandbanks," he recalled. "But the biggest problem was the very cold water. Swimming in it for four to six hours is quite difficult. Nowadays, people can use neoprene suits, but back then, the only thing we could do was smear Vaseline all over our bodies."

The Baltic Sea was just 18 degrees Celsius (64 degrees Fahrenheit) the night he fled. He used 30 tubes of petroleum jelly to protect himself against the cold.

Mitbauer said he was happy as an athlete in the GDR system, but he wasn't pleased with life in the country. When he traveled abroad for competitions, he also saw a huge discrepancy between reality and East German propaganda. He said he felt his home country was a lawless state and realized early on that he wanted to leave - and that he could use his aquatic talents to do it. 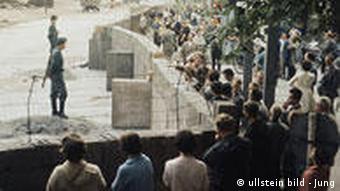 A divided East and West Berlin

"I basically used the East German system that promoted sports in the way it did to ultimately escape it and pursue my own goals," he said.

According to records kept by the former East German secret police, or Stasi, more than 600 athletes escaped to the West by 1989, the year the Wall came down. Soccer player Falko Goetz, cyclist Juergen Kissner and coach Joerg Berger were some of them. The Stasi called referred to them as sports traitors.

Mitbauer's frequent conversations with West German athletes during foreign competitions also aroused the suspicion of East German state security officials and he was even arrested before he fled. They kept him in custody for seven weeks - in the Stasi prison Hohenschoenhausen in Berlin. He went through the gamut: solitary confinement, light deprivation, torture. 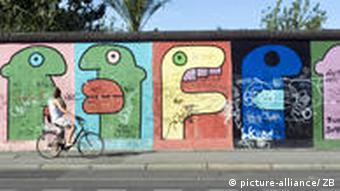 But Mitbauer divulged nothing and immediately began training for his escape in water holes at old coal-mining plants once he was released from prison. Yet even after fleeing to the West, Mitbauer was still scared of the Stasi.

"Of course I was scared," he said. "Some people were killed after all. Others were drugged and dragged back to East Germany. Someone even loosened the lug nuts on the wheels of my car once. In the beginning, right after fleeing, I used to push a big cabinet in front of my apartment door."

Still, once in the West, Mitbauer quickly learned how to market himself. He received 10,000 German Marks back then from Stern magazine for his personal story. He certainly needed the money - considering that he started a new life nearly naked after his escape. The only thing in his possession when he arrived on shore at Travemuende were his swim trunks, his flippers, a ring sewed into one of them, and a medal. 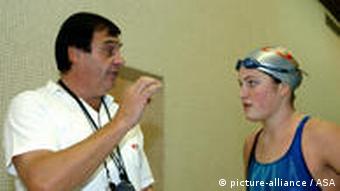 Swimmer Axel Mitbauer (l), as a coach later in life

"I left at 9 p.m. at night and arrived at a buoy at around 1 o'clock in the morning," he recalled. "I had wanted to spend the night on it, warm up from the sun the next morning and then swim on. But a German ship ended up picking me up around 7 a.m."

It was a West German ship that took him to Travemuende. He was then taken to a reception camp in Giessen, where he received identification documents. Stern journalists met him there and took him to Hamburg, where he told them his story of escape.

Mitbauer later studied sports education in Cologne and worked as a coach in Italy and Switzerland. He continues to live in Switzerland and also coaches up-and-coming swim talents in Karlsruhe, Germany. He's coached swimming great Jacques Mayol, a Frenchman, whose legendary two-man competition with Italian Enzo Mairoca later appeared in the film "The Big Blue."

Even today he said he understands why people in eastern and western Germany don't quite understand each other, even though the Wall fell 20 years ago.

"That gap will not be bridged until the next generation is at the fore - a generation that has grown up familiar only with a united Germany," he said. "Only then will the two sides have grown together into a unified whole."

Explore Deutsche Welle's multimedia presentation of the dramatic stories of those who tried to escape from communist East Germany and the history of the Wall that was meant to keep them in. (03.11.2009)

Nearly 20 years after the fall of the Wall, communist East Germany is an enigma for young Germans. Some do not even know who built the Wall that divided Germany for decades, but educators are trying to change that. (29.10.2009)