The app was launched in June with the intent of warning users that they have come into contact with people who have since tested positive for COVID-19. But more Germans need to participate for the app to be effective. 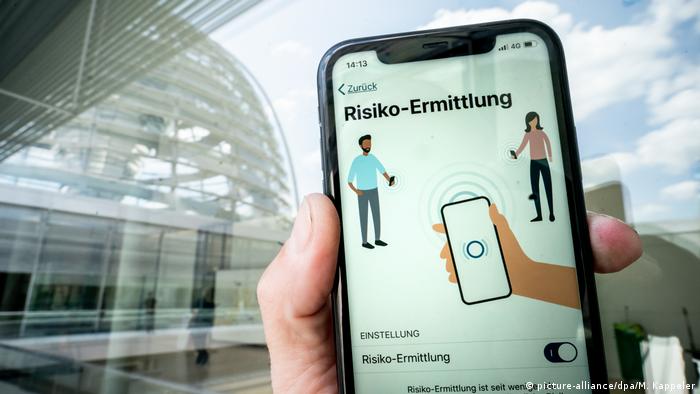 In June, Germany introduced its official coronavirus tracing app, which, the government reports, has been downloaded over 18 million times so far — with about 750,000 users having shared test results. "The coronavirus app is effective, it is in high demand, and it functions well, helping prevent further infections," a representative of Germany's Health Ministry responded when DW asked foer a three-month evaluation of the app.

The figures are indeed respectable, said Gert G. Wagner, a member of the independent Council of Consumer Affairs Experts, which advises Germany's Justice Ministry. But, he said, "this does not indicate that the app is also effective." Unless at least 50% of the population uses the app, he said, "only a fraction of new coronavirus infections will be detected." So far, he estimates, a mere 5-6% of infections are traced by the app.

In June, the six-member council called smartphone tracing a "social experiment with an entirely unclear outcome" and warned that "it will soon become clear the app is no panacea." Unless, at least one in three people in Germany were to adopt it early, the council advised, it "would produce very few insights during this low infection period" of the summer ahead of a feared infection spike in the autumn.

In August, Wagner told the press that too few people were using the app. Wagner said, about one-third of the population had indeed installed the app on their smartphones by now. However, a detailed statistical analysis of the generated data still has not been conducted.

According to Germany's Health Ministry, the government has not set a target for how many people should participate. The ministry insists that "every single installed app is beneficial."

The ministry could not offer definitive data about the app's efficacy. All data is encrypted and saved only on users' smartphones. "Neither the publisher, the Robert Koch Institute, nor any third party has access to the data," according to the ministry. This is why there is "no in-depth analysis on how many users have been warned by the app that they may have encountered an infected person."

Germany, like many other EU member states, has opted against centrally storing data generated through its coronavirus tracing app. This approach was adopted to meet data privacy standards.

Read more: COVID-19 tracing apps proving to be a tricky business around the world

Many Germans downloaded the app when it was launched in June. Soon after, however, some users began complaining about errors and unclear in-app texts. Developers then set up a help page. German officials, meanwhile, have done little to comment on or promote the app. "I had expected the government to launch a proper ad campaign, involving several ministers and celebrities, to promote use of the app," Wagner said.

No surveys have been carried out regarding app usage either — though, Wagner said, such polls would not violate anyone's privacy. Surveys could shed light on the number of false alarms and how many users have had themselves tested or gone into quarantine after receiving a warning message. Other users have said the app failed to warn them. Wagner said the app could have also featured an option for users to voluntarily donate data for research purposes.

Scholars at the Technical University of Munich found that more could have been done to promote the use of the app. A survey found that 51% of respondents did not believe that the app would help contain the pandemic. Back in June, when the app was launched, only 41% of respondents held this view.

Many Germans are also concerned about the app gathering personal data. In June, 57% of respondents feared the software could be used by the state to spy on people. In August, 44% still believed that this was a serious risk.

So using the app remains entirely voluntary. It would be practically impossible to make the app compulsory: Not everyone owns a smartphone or a device new enough to be compatible with the app. Wagner said there were also ways to simply not use the app — people could switch off their phones, for example, or leave them at home. There is some good news, too. In September, the European Union launched an interface that could allow national tracing apps to work across borders.