Boules is cool again, or so they say, with registered clubs mushrooming all over France and the UK. But there's a whole other petanque culture to be found on autumn evenings along Berlin's canal banks.

"Please, can you get as little information as possible from that Guardian article," my brother says to me, looking strained with exasperation when he learns I'm planning to write about his favorite pastime. He is referring to a piece published over the summer about the new trend for boules in France. The author took the occasion of a celebrity boules tournament set up by fashion icon Karl Lagerfeld in St. Tropez, and then described at length how the stereotypical Gallic pastime was suddenly in again.

The article was illustrated with photos of supermodels and film-stars idling around, gaily flinging metal balls all over the place while wearing straw hats, white shoes and similarly breezy fin-de-siecle attire. It's all in the wrist

But it wasn't the sight of his favorite social game being hijacked by a bunch of giddy, overpaid fools that so offended my brother - a man who does get frustrated with that sort of thing - it was that the journalist made a distinction between this and "the little image in his head" of normal, traditional boules, also known as petanque: a game for morose, alcoholic French pensioners in string vests and flat caps.

The truth about boules

Certainly, drink does flow at the boulodromes my brother regularly attends on the banks of Berlin's canals, and perhaps the over-60's bracket is slightly better represented than in other sports. But Berlin's boules scene is a happy mix of genders, ages and nationalities. In fact, it is one of the few public spaces where 'old' Berlin - the city's dwindling number of locally born residents - mingles freely with 'new' Berlin - the growing hordes of international, pleasure-seeking youth. A life of leisure can be a great social glue.

The burdens of prejudice are lifted for long hours on those hallowed rectangles of gravel in the neighborhoods of Kreuzberg, Neukoelln and Schoeneberg, and while inter-generational friendships are not exactly forged on a daily basis, one should not underestimate the brief moments of cultural exchange that spark when respectful nods pass between pistes in acknowledgement of a particularly successful boom shot. No one is a professional, but everyone is united in what my brother calls "a joyful passion for the game."

Boules is basically a pub-sport without a pub. In lieu of a bar people bring their own alcohol and/or cannabis, and in the summers some enterprising locals set up a beer and bratwurst stand. Like all pub sports, the emphasis is on patience and accuracy, and so a moderate use of soft drugs is sometimes essential for attaining the requisite concentration and steadiness of hand. Of course, there are 'professional' petanquists in the world who maintain strict regimes of abstention, but in Berlin, a state of mild inebriation is de rigueur. 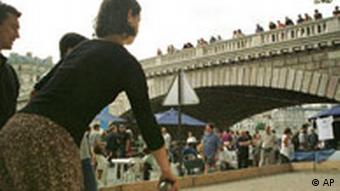 The game is suddenly cool again in Europe

Not that the game is not organized here. There are 10 official boules clubs in Berlin, who run tournaments in designated areas around the city. There is also an umbrella organization, the Landes-Petanque-Verband Berlin (LPVB), which devises league tables and regulates local rules.

But Berlin's young, carefree recreational players have little to do with the serious boules world. Since this community has developed its game independently, with borrowed boules and little official input, there's always a slight disconnect with the serious players. Their tactical vocabulary, for instance, is largely self-invented: Where official strategists talk of pointing, shooting and the carreau (the three most common shots) my brother's friends speak of "the boomer," "the lobber" and "the dribbler," or indeed the "dribble and pop" - when you roll the boule the entire length of the pitch and then it "pops," or stops, right next to the jack, or, more properly named, the piglet.

Also, boules has become an ideal way to deal with an attack of late-night insomnia, with many players bringing their own lamps for a night session. So if you ever feel like hanging around the sinister areas down by the canals of Treptow in the early hours of the morning, you may just chance upon my brother honing his dribble and pop.

Ben Knight's little brother is a keen petanquist who lives within a dribble and pop of several boulodromes in the districts of Kreuzberg, Treptow and Neukoelln.

Is Berlin's status as Europe's unofficial Capital of Cool under threat as the city rides an enthusiastic wave of karaoke fever? DW's Neale Lytollis and the rest of the city certainly don't think so. (19.11.2010)

From The Guardian: How boules got cool