Too big for the museum: Claes Oldenburg

A Pop Art sculptor who doesn't like labels: Claes Oldenburg, who turns 90 on January 28, made a name for himself through enormous, colorful sculptures of everyday objects.

Associated with the Pop Art movement, Claes Oldenburg however doesn't like labels. He is an artist for all, making art for everyone. Art that doesn't belong in museums, but which is out in the open, in the middle of cities, for everyone to see.

His enormous sculptures are in public places across the US and Europe. Many are at least 10 meters (32 feet) high, recreating everyday objects that we all know well: a tube of lipstick or a pack of ice, a pocket knife or a garden hose. The objects, while mundane, are not selected arbitrarily.

Referencing the location on which the sculpture stands, Oldenburg's late work often revisits stories from the past, as in Freiburg im Breisgau. The Stühlinger Park, where his sculpture of a garden hose stands today, was previously used for allotment gardens. Today, there is no reminder of it outside of Oldenburg's oversized sculpture representing the object essential for gardening.

It is one of many sculptures that Oldenburg created together with his second wife, the Dutch sculptor and art historian Coosje van Bruggen. Their first joint work, "Pool Balls," three concrete billiard balls, is located in Munster, Germany.

A police reporter becomes an artist

Born on January 28, 1929 in Stockholm, Sweden, Oldenburg's father was a diplomat and his mother an opera singer. In 1936, the family moved to the USA. 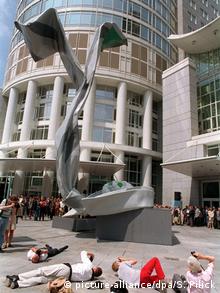 Claes Oldenburg did not initially aspire to a career as an artist. He studied English literature before becoming a police reporter at the City News Bureau of Chicago. After being promoted to the editorial staff, the artist did a 180-degree shift: He didn't want to grow stale behind a desk.

'The Store,' his modern art shop

In 1956, he moved to New York, then a Mecca for contemporary artists. There he opened "The Store," a combined studio and gallery where he exhibited replicas of consumer goods and everyday objects made out of plaster or papier-mache.

He collected the raw material for his sculptures on the streets of New York and, in keeping with the spirit of the times, he organized art happenings and performance art events. The young artists of the era wanted to turn the art world upside down with their performances, which Oldenburg himself later described as torturous for all involved — both the artists and the public, he said in an interview with the German weekly Die Zeit.

After just a few years, the Big Apple no longer sufficed as a source of inspiration; Oldenburg uprooted to Los Angeles. His artworks really grew puffy there, as he began to create "soft sculptures": huge hamburgers, fries and pieces of cake as big and soft as sofas.

Food was not his only inspiration. His early works also included a crumpled toilet seat and soft vinyl light switches. With his art well-received by collectors and exhibition organizers, by the end of 1960, he was allowed to exhibit at the MoMA in New York; a few years earlier, he had already presented his works at the Venice Biennale. 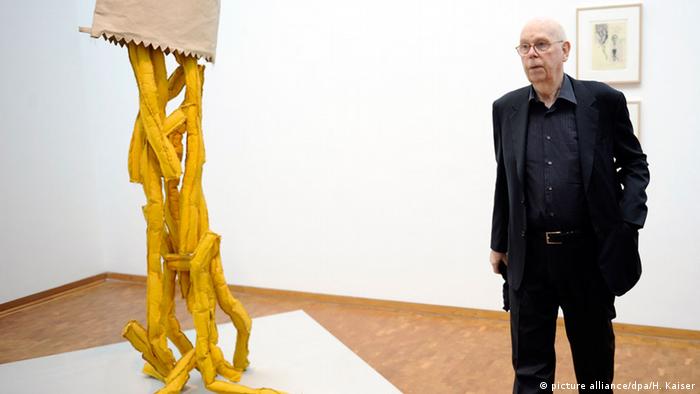 The artist, seen here in 2012 at an exhibition of his work at Cologne's Museum Ludwig

Art for the city — not for the museum

Beginning in 1977, Oldenburg worked together with his wife Coosje van Bruggen and they shifted to other materials. Instead of soft fabrics, he began to use steel, concrete and hard plastics. The sculptures likewise grew in size; their sheer dimensions prevented them from being shown in museums.

That, too, was a conscious decision on Oldenburg's part. As he wrote: "I don't like art that sits on its butt in a museum."

A new solo exhibition by artist Julian Rosefeldt at the Hamburger Bahnhof in Berlin pays homage to the unique textual form of the manifesto, casting Cate Blanchett as 13 strikingly different characters. (22.02.2016)

Claes Oldenburg is known for his enormous sculptures inspired by everyday objects. Adorning the landscapes of public places, he makes them visible to all. Several of his monumental works of art can be found in Germany. (28.01.2019)