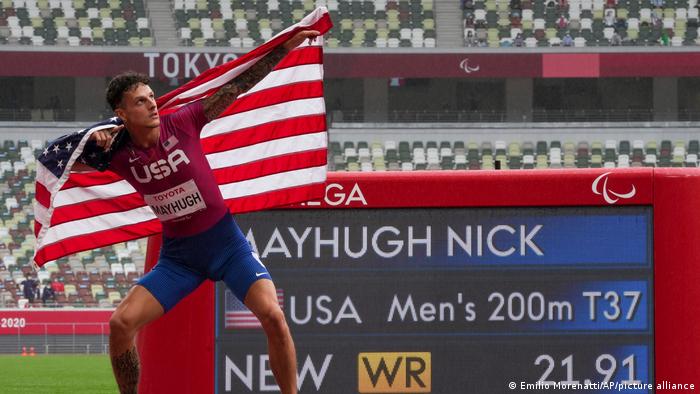 After two golds, a silver and smashing his own world record in the men's T37 200m on Saturday, American Nick Mayhugh said he wanted to be like Usain Bolt.

"I know I'll never be able to run 9.5 for the 100m, but I want to be the Usain Bolt of the Paralympics," the former footballer who also took gold in the 100m, Friday's night's 4x100m universal relay and won his silver in the 400m.

"I want to be that standard for kids looking up and to know that even if you are disabled there isn't a negative connotation to it.

"You set your own limits. You believe in yourself and you set your own barrier and surpass it. Usain Bolt did exactly that with me. He was my greatest inspiration so thank you to him."

Elsewhere in the last day of track and field, Hannah Cockroft, of Great Britain, won her seventh Paralympic gold in the T34 800m by a distance.

"I don't think it will ever sink in," Cockroft said. "Not many athletes get the privilege of doing this for 10 years or get to stand on the podium that many times," added the runner, who also won the T34 100m in Tokyo to add to her three golds at Rio 2016 and two from London 2012.

From paratrooper to Paralympian: Tim Focken

Afghanistan war veteran Tim Focken, the first German soldier injured in conflict to take part in the Paralympics, failed to qualify for the final in the 50 metre free shooting on Saturday after finishing 14th.

The 37-year-old went into his Paralympics debut weakened by flu. "I have been ill for two days and am taking antibiotics," he said.

Focken announced his intention to compete in the next Paralympics in three years. "My goal now has to be Paris," he added.

But there was also success for Germany as Edina Müller won her first gold medal in canoeing. The 38-year-old beat Ukraine's Marina Maschula in the 200m final to win her second medal in her new sport after taking silver in Rio. The Hamburg native had previously won gold and silver as a wheelchair basketball player.

Brazil's men's 5-a-side football team made it a clean sweep of golds in the event since it was introduced in Athens 2004. Just as they did in the Greek capital, the Brazilians beat South American rivals Argentina in the final, this time by a 1-0 scoreline.

The successful staging of the Paralympics during a pandemic was lauded as "remarkable" on Saturday by the International Paralympic Committee spokesperson.

Craig Spence hailed "an amazing team effort" that had enabled the Games to take place and said the athletes' performances had been "out of this world".

"It's remarkable. There were doubts in the past two years when I thought these Games weren't going to happen," Spence told reporters. A lot of people thought it was impossible to stage the Olympics and Paralympics during a pandemic. We took our inspiration from our athletes."

Records fell, personal bests were set and gold medals were claimed on another action-packed day at the 2020 Tokyo Paralympics. Recap all the highlights from Day 6 from the Games.

The parade of nations at the 2020 Tokyo Paralympics opening ceremony was led by members of the refugee team, who received a message of support from Bayern Munich footballer and UN ambassador Alphonso Davies.

The Paralympics provide some of the best photographers from around the world with exciting events to capture in unforgettable images. Here are some of the highlights from Day 10.