Italy has its first 100-meter Olympic champion as Lamont Marcell Jacobs wins gold. Swimmers Caeleb Dressel and Emma McKeon each picked up their fifth gold medals. Follow the latest from Tokyo on DW. 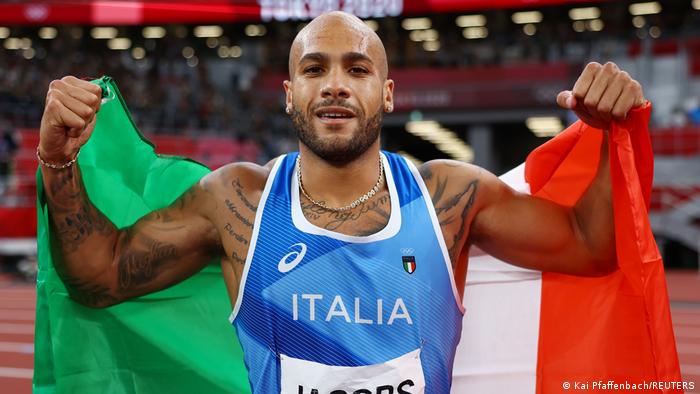 Lamont Marcell Jacobs won gold in the men's 100-meter dash, becoming the first Italian to ever win the event.

In a wide-open men's final, Jacobs, 26, chased down American Fred Kerley in the final meters to take the gold, setting a new European record with a time of 9.8 seconds. Kerley picked up the silver as Canadian Andre de Grasse took the bronze.

"It's been my dream since I was a child," Jacobs said after his win. "I've won an Olympic gold after Usain Bolt, it's unbelievable. Tonight, staring at the ceiling perhaps I will realize."

Jacobs was born in the United States but moved to Europe with his Italian mother when he was one month old. He had broken 10 seconds in the 100 meters twice earlier this year and won the 60-meter dash at the European Indoor Championships in Poland in March.

The result capped off a big day for Italian athletics. Jacobs' result came 10 minutes after Gianmarco Tamberi shared the gold with Mutaz Essa Bashim of Qatar in the men's high jump.

"I need a week or so to understand what has happened," Jacobs said. "Seeing Gimbo win the high jump gold fired me up a lot.

Here's a roundup of the latest news and results from the Tokyo Olympics:

Alexander Zverev became the first German tennis player to win gold in the men's singles with commanding 6-3, 6-1 straight sets victory over Karen Khachanov, representing the Russian Olympic Committee. Steffi Graf won the women's title in 1988. More on that one here.

American swimmer Caeleb Dressel picked up his fifth gold medal in the men’s 50-meter freestyle, joining an exclusive club of swimmers to win at least five medals at a single Olympics. Michael Phelps did it three times, including a record eight golds at the 2008 Beijing Games. The others are Mark Spitz (seven golds in 1972), East German Kristin Otto (six golds in 1988) and another American, Matt Biondi (five golds, also in '88).

Emma McKeon also struck gold in the pool for the fifth time in Tokyo, winning the women’s 50-meter freestyle and the 4x100-meter medley relay with Australia. She ends her Olympics with seven medals in total — five gold and two bronze.

American Bobby Finke gave the United States further success in the pool, winning the 1,500-meter freestyle. The US has collected 30 swimming medals in Tokyo, including 11 golds.

Logan Martin won Australia the first ever gold in BMX freestyle, which was making its Olympic debut. Great Britain's Charlotte Worthington put on a show to claim the women's title, landing the first 360 backflip in women's competition.

There was another win for the US when Xander Schauffele held off a huge chasing pack to win men's golf gold ahead of Rory Sabbiatini, representing Slovakia. Pan Cheng Tsung, of Taiwan, won a seven-man playoff to clinch bronze.

In gymnastics, Artem Doglopyat of Israel won the men's floor routine, edging Spaniard Rayderley Zapata. The two gymnasts had the same score , but the gold went to Doglopyat due to his more difficult routine. Briton Max Whitlock took gold in the men's pommel horse final.

Florian Wellbrock picked up bronze in the 1,500-meter freestyle race won by Finke. The Bremen native, 23, is a two time world champion, but his third-placed on Sunday was his first Olympic podium.

Wrestler Aline Rotter Focken will go for gold in the women's freestyle under-76kg category. She defeated Hiroe Minigawa 3-1 with an aggressive take down two minutes from time. She faces American Adeline Maria Gray in Monday's final.

Germany's handball team officially punched their ticket to the quarterfinals with a 29-25 win over Brazil. Steffen Weinhold and Juri Knorr led the way with six goals each as Germany led most of the way.

The men's field hockey team has reached the semifinals in Tokyo with a narrow victory over reigning champions Argentina. The team now play unbeaten favorites Australia, who edged past the Netherlands on penalties, in the last four on Tuesday.

And both men's and women's table tennis teams reached the quarterfinals. The men made quick work of Portugal, winning three matches to zero, and the women had a similarly easy time taking care of Australia.

Belarusian sprinter Krystsina Tsimanouskaya was removed from the Tokyo Olympics without her consent. She had objected publicly to being entered into the women's 4x400-meter relay at the by Belarus' athletics federation without prior notice. Tsimanouskaya asked the International Olympic Committee (IOC) for help in a video posted Belarusian Sport Solidarity Foundation, an NGO that supports athletes in conflict with Belarus' authoritarian regime.

Organizers say they have banished six people, including two silver medalists from the country of Georgia, for breaking rules designed to protect against COVID-19. Judokas Vazha Margvelashvili and Lasha Shavdatuashvili were seen near Tokyo Tower on Tuesday, after their events were finished. Games Chief Executive Toshiro Muto said it was a "clear and serious violation" of the so-called health and safety playbooks. The other four were accredited contractors from Britain and the United States arrested for allegedly using cocaine before the Olympics opened.

Germany's 1-1 draw with Ivory Coast has seen the men's football team knocked out of the Olympics. Meanwhile, Sarah Köhler became the first German in 13 years to win a swimming medal. Follow the latest from Tokyo with DW.

Brisbane is the first winner in the new streamlined format that allows the IOC to pick from among the initial bids and approach a host city to open uncontested negotiations.