Germany's 1-1 draw with Ivory Coast has seen the men's football team knocked out of the Olympics. Meanwhile, Sarah Köhler became the first German in 13 years to win a swimming medal. Follow the latest from Tokyo with DW. 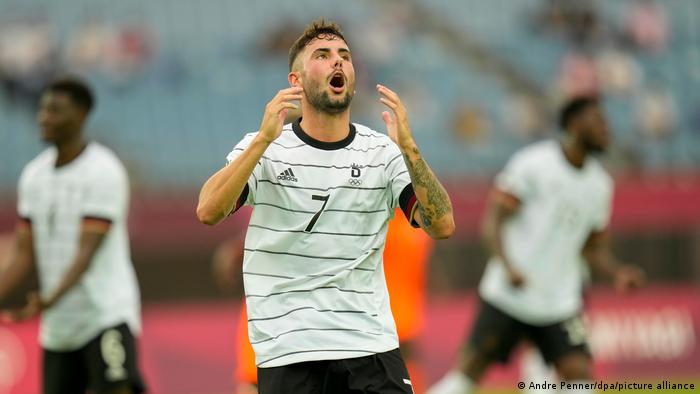 An own goal has ultimately sent Germany's men's football team home after they failed to make it out of the group stage at the Tokyo Olympics.

The 1-1 draw against Ivory Coast wasn't enough to progress, with Germany's opponents instead going through to the quarterfinals.

The game's defining moment came in the 67th minute, when Benjamin Henrichs tried to clear a dangerous cross in the six-yard box. The defender was only able to send the ball into his own net to give Ivory Coast a 1-0 lead.

Germany fought back with a stunning free-kick from Eduard Löwen in the 73rd minute but they were unable to find the required winning goal.

Here is the latest news and results from the Tokyo Olympics: 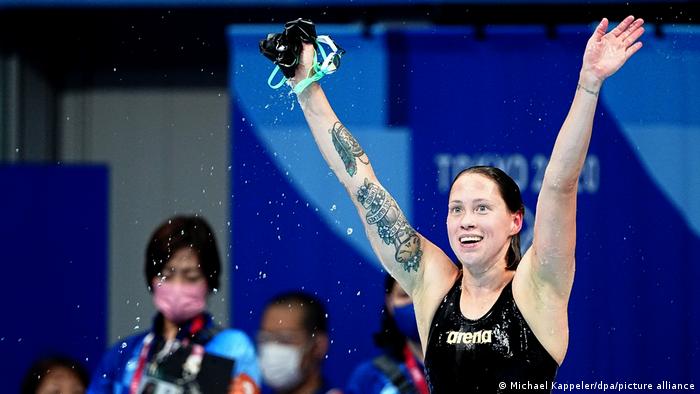 Sarah Köhler became the first German in 13 years to win a medal in swimming at the Olympics. She won bronze in the women's 1,500-meter freestyle, breaking her own German record with a time of 15:42.91.

There was reason to celebrate in the dressage as well, as German athletes claimed gold and silver. Jessica von Bredow-Werndl beat her mentor and seven-time Olympic champion Isabelle Werth to first place, a day after they combined to win the team event title.

Germany suffered another defeat in men's handball, this time against France. The 29-30 loss left Germany in fourth place in Group A following a defeat to Spain on Saturday.

Germany's women's field hockey team punched their ticket to the quarterfinals with a 4-2 win over Ireland. Lisa Altenburg scored twice as Germany held off a late comeback from Ireland to remain in perfect pool play.

Alexander Zverev withstood scorching temperatures to reach the last eight of the singles draw in men's tennis. He defeated Georgia's Nikoloz Basilashvili to set up a quarterfinal match with Jeremy Chardy of France.

After a disappointing lost to Italy, the German men's basketball team beat Nigeria 99-92 while shooting an efficient 54% from the floor. Johannes Voigtmann led German scorers with 19 points, while NBA pro Moe Wagner added 17 points off the bench. The Germans made it to the quarterfinals with a win over Australia on Friday.

After besting Katie Ledecky at 400 meters, Australian Ariarne Titmus prevailed once more in the women's 200-meter freestyle. Titmus, nicknamed "The Terminator," secured her second gold medal with a time of 1:53.50, while Ledecky finished 1.7 seconds behind in fifth. The American redeemed herself in the 1,500-meter freestyle soon after, winning gold with a time of 15:37.34.

Hungary's Kristof Milak stormed to victory in the men's 200-meter butterfly, winning the race by two lengths. Milak set a new Olympic record with a time of 1:51.25, which was 2.5 seconds ahead of second-place Tomoru Honda of Japan.

Cyclist Primoz Roglic claimed Slovenia's first-ever gold medal after winning the time trial. The 31-year-old former ski jumper put in a perfectly executed ride at the 44.1-kilometer route at the Fuji International Speedway. His medal comes after his compatriot and teammate Tadej Pogacar earned bronze in the road race. 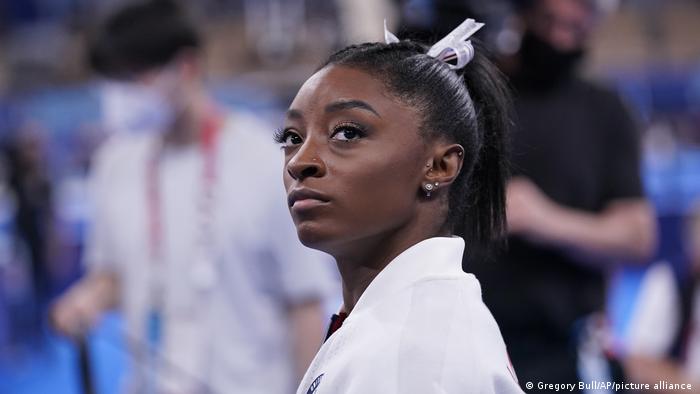 A day after pulling out of the team competition, American gymnast Simone Biles withdrew from the individual all-around to focus on her mental health. USA Gymnastics said the 24-year-old will continue to be evaluated daily to determine whether she will participate in individual events. Biles has received widespread support from the Olympic community.

Extreme heat once again was a factor at the Ariake Tennis Park with temperatures rising to 31 degrees Celsius (88 Fahrenheit) and a heat index of 37 degrees Celsius. Paula Badosa of Spain was forced to retire due to heatstroke and had to be taken off the court in a wheel chair. Russian Daniil Medvedev said "I can die" to the head umpire during his victory over Italian Fabio Fognini.